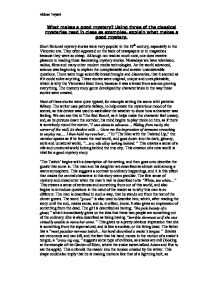 What makes a good mystery? Using three of the classical mysteries read in class as examples, explain what makes a good mystery. Short fictional mystery stories were very popular in the 19th century, especially in the Victorian era. They often appeared on the back of newspapers or in magazines because they were so cheap. Although not read as much now, one does receive pleasure in reading these fascinating mystery stories. Nowadays we have television, radios, films and many other modern media technologies. As the world advanced, science was beginning to explain the unexplainable and answer unanswerable questions. There were huge scientific breakthroughs and discoveries, that it seemed as if it could solve anything. These stories were original, unique and unexplainable, which is why the Victorians liked them, because it was a break from science proving everything. The mystery story genre developed by characteristics in the way these stories were created. Most of these stories were quite typical, for example setting the scene with pathetic fallacy. The writer uses pathetic fallacy, to help create the mysterious mood of the scenes, as this device was used to assimilate the weather to show how a character was feeling. We can see this in 'The Red Room', as it helps make the character feel uneasy, and, as he pursues down the corridor, his mind begins to play tricks on him, as if there is somebody round the corner, "I was about to advance... Hiding from me by the corner of the wall, its shadow with... Gave me the impression of someone crouching to waylay me.... I then held my revolver..." In "The Man with the Twisted Lip," the narrator speaks as if he leaves the real world, and goes down into the dark, gloomy, eerie and unnatural world, "...is a vile alley lurking behind." This creates a sense of a vile and unnatural world lurking behind the true city. ...read more.

This makes us more interested in reading further, as there seems to be something eerie about this night that the character has chosen, and also adds suspense. The 'Red Room' is set in a gothic style castle, which is described, as dark and gloomy. The ornaments set in the room and also the conveniences relate to the previous deaths that had taken place within the castle. The passage within the castle is described as a long, draughty subterranean passage. The word "subterranean" means "underground or secret" (from www.dictionary.com), which makes the reader know that this is not something normal, and has some relation to the dead. This helps the reader build an image of the setting and from this the reader may start to feel a little scared because often people relate darkness to be a scary place. This may also create a mysterious atmosphere, the setting seems to be spooky and creepy because a lot of the narrators feelings are expressed by the use of his words related with the subject, i.e. quivers, rustling. Colour is also used throughout the story as we, the reader, as a whole, seem to relate certain colours to different things, for example, "this haunted room of yours..." is 'The Red Room'. The supernatural associations with the colour red because it symbolises evil, danger and blood. Because of this, readers may be left wondering what is ahead in the story and if anything dangerous may happen. This tension makes a good mystery story. "Fashions born in dead brains", "Violent pulsation" and "Oozing walls." This adds implicit criticism which over turns the natural world, from this we get the feeling of the distortedness that 'The Red Room' brings and therefore the readers might fear what the room brings as the story progresses. "Descends into darkness." When we hear this, we immediately link it with imagery of hell. There is a continuous use of pathetic fallacy. ...read more.

This plays on a fear of old age, as it is something never encountered or experienced by the reader. Wells has done a good job by maintaining the emotions of all stereotypical ghost/gothic stories. He has used archaic language, an example of which is the maintenance of emotions, which would have been appropriate for the Victorian society and because of the excellent visual images which help readers to picture the terror quicker. Readers would enjoy being scared and might be relieved towards the end because the ending twists everything by revealing there was clearly nothing. 'The Man With The Twisted Lip' is one of many Sherlock homes stories that were extremely popular with the 1890's audience. Just like the other stories above, 'The Man With The Twisted Lip' has a lot of mystery and strange happenings in it. This story is set in the East End of London, which was highly polluted, full of smoke belching factories around which the workers lived in slum housing. With disease on the high and medicines being expensive many doctors prescribed opium-based laudanum to the moneyed classes who could afford it. This is shown in the story when Dr. Watson enters the opium den. Instead of being filled up of working class people it is in fact crammed full of the upper class. In 'Twisted lip', a character (although not a very substantial one) is introduced as the first word in the story, with a short background on his dead brother and how he died of an opium addiction. This being quite pointless at first is quite a cunning trick the writer has introduced here, as for the next few paragraphs the reader thinks that this 'Isa Whitney' is what the story is based on, the trick being the writer has made the story out to be something it is not, which is intentionally ironic as the story is based on a man trying to conceal the truth. ...read more.