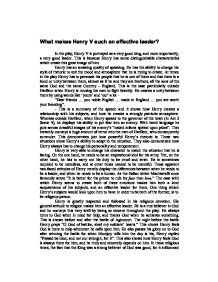 What makes Henry V such an effective leader?

What makes Henry V such an effective leader? In the play, Henry V is portrayed as a very good king, and more importantly, a very good leader. This is because Henry has some distinguishable characteristics which create this great image of him. Henry has an amazing quality of speaking. He has the ability to change his style of rhetoric to suit the mood and atmosphere that he is trying to create. At times in the play Henry has to persuade his people that he is one of them and that there is a bond or unity between them, almost as if he and they are brothers, all the sons of the same God and the same Country - England. This is the case particularly outside Harfleur when Henry is rousing his men to fight bravely. He creates a unity between them by using words like 'yours' and 'our' a lot - "Dear friends ... you noble English ... made in England ... ...read more.

Henry is greatly respected and followed in his religious devotion. His general attitude to religion makes him an effective leader. He is a true believer in God and he conveys this very well by being so sincere throughout the play. He always turns to God when in need for help, and thanks God when he achieves something. This is shown before and after the battle of Agincourt. The night before the battle Henry prays "O God of battles, steel my soldiers' hearts." This shows Henry feels God is there to help whenever he calls upon him. He also passes his glory on to God after winning the battle for when Montjoy tells him the day is his, Henry replies "Praised be God, and not our strength, for it". This also shows how Henry feels God is always there for him, and he truly and sincerely depends on him. In these religious times, the fact that the King was a strong believer of God was good, for it influenced and helped his people's faith. ...read more.

Henry feels very strongly about how his decision to attack France could affect his subjects - even when Pistol offends the King, Henry says "God be with you" just so that he doesn't lose his support. We see Henry personally caring about his subjects when he walks around the camp on the night before the battle of Agincourt. His men are downhearted and expecting to die on the next day. Henry tries to urge his people on to have faith in God and hence be courageous in battle. He wants his subjects to have faith in him and he actually cares what they feel. This is shown when he prays to God to get his soldiers to be brave - "O God of battles, steel my soldiers' hearts. Possess them not with fear". Henry possesses most of the characteristics of an effective leader. He is merciful and merciless, evokes fear and love, and is a great King, yet still a human. These attributes when alone would not create a good leader, but when put together into one person - Henry - they create a great leader. ?? ?? ?? ?? ...read more.