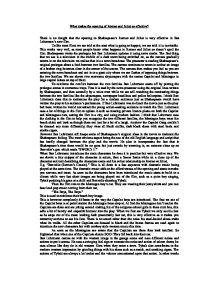 What makes the opening of Romeo and Juliet so effective?

What makes the opening of Romeo and Juliet so effective? There is no dought that the opening to Shakespeare's Romeo and Juliet is very effective in Baz Luhrmann's new film. Unlike most films we are told at the start what is going to happen, we are told it is inevitable. This works very well, as most people know what happens in Romeo and Juliet so doesn't spoil the film. Shakespeare wrote the prologue but Baz Luhrmann updates it using news media. The first thing that we see is a television in the middle of a dark room being switched on, as the camera gradually zooms in on the television we realise that it is a news broadcast. The presenter is reading Shakespeare's original prologue about a feud between two families. The camera continues to zoom in so that an image of a broken ring becomes clear in the corner of the screen. The camera then makes you feel as you are entering the news broadcast and out in to a giant city where we see flashes of opposing things between the two families. ...read more.

Anyhow the Capulet Gang couldn't be dressed any more differently; they wear all black outfits, dark black shoes with steel heels and smoke cigars. However Baz Luhrmann still keeps some of Shakespeare's original ideas in the movie to maintain the Shakespeare feeling. The most obvious aspect being the use of the old English language and script that has hardly changed between the play and the movie. He also in incorporates the fact that in Shakespeare's time there would be no guns but just swords by zooming in, an extreme close up on Benvolio's gun which reads "SWORD 11" When Baz Luhrmann introduces the main characters he does it in peculiar but very effective way. We are shown a tiny snippet of the character in action, then a freeze frame while on a close up of the character and text describing the characters name and his or her relationship to Romeo or Juliet, E.g. "Benvolio (Romeo's Cousin)." This is all done in a fast sequence with dramatic music being played at the same time. The dramatic music adds to the effectiveness of the opening and starts to make you nervous and tense. ...read more.

All the other Capulets are dressed in black and the freeze frames are used again to introduce the new characters but with cowboy style western music this time. As soon as the Montegues are aware that the Capulets are there they look terrified. So frightened that when one of the Capulets shouts BOO! They fall back into their car. Baz Luhrmann carries on with the western image in the garage scene and uses different noises and actions to put it across. He uses a swinging fuel sign to recreate the noise and action of saloon doors; he uses silence like they do in old western films when they enter a town. Tybalt also contributes to the modern western impression by grinding things with his shoes such as a match, and smoking cigars. The actions of Tybalt are always a lot louder and the volume concentrated upon that action. In other words every thing else is silent except Tybalts action like the clinking of his steel shoes or the striking of a match. I found that the start of the film is extremely effective and that the Montegues are portrayed as being the good people who are not looking for trouble. Baz Luhrmann has made a very good job of the opening few scenes. ...read more.

This makes some good points on visual and audio presentation but more links need to be made with the original text and the way Shakespeare presented his characters in his original text.