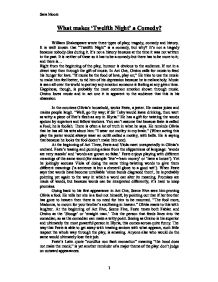 What makes 'Twelfth Night' a Comedy?

What makes 'Twelfth Night' a Comedy? William Shakespeare wrote three types of play; tragedy, comedy and history. It is well known that "Twelfth Night" is a comedy, but why? It's not a tragedy because nobody dies during it. It's not a history because at the time it was not written in the past. It is neither of these so it has to be a comedy-but there has to be more to it; and there is... Right from the beginning of the play, humour is obvious to the audience. If not in a direct way then through the gift of music. In Act One, Orsino calls for music to feed his hunger for love. "If music be the food of love, play on;" He tries to use the music to make him feel better, to rid him of his depression because he is melancholy. Music is seen all over the world to portray any emotion someone is feeling at any given time. Happiness, though, is probably the most common emotion shown through music. Orsino loves music and in act one it is apparent to the audience that this is his obsession. In the countess Olivia's household, works Feste, a jester. He makes jokes and makes people laugh. "Well, go thy way; if Sir Toby would leave drinking, thou wert as witty a piece of Eve's flesh as any in Illyria." ...read more.

He is surprised because to him, it was she who wrote the letter, "Remember who commended thy yellow stockings-" It is amusing to think of the most serious man in the world dancing around in bright coloured stockings, laughing and joking and then to be locked away in the dungeon and made to believe himself mad. Feste pretends to be one, Sir Topas, to trick Malvolio into thinking he is mad. Malvolio believes himself to be going in sane. Sir Toby Belch, Sir Andrew Aguecheek, and Maria enjoy Feste's amusing foolery. Explaining the joke is a sure way to kill the humour, but two things that Feste says would make his Elizabethan audience laugh and not us because they were well known at the time. From Act Five, Scene One, line five: "This is to give a dog and in recompense desire my dog again." Queen Elizabeth the First begged a dog from a courtier saying she would grant him any request in return. He replied, "Give me my dog again." Lines sixteen and seventeen: "...if your four negatives make your two affirmatives..." This was a favourite joke among men of the time was that a girl's 'no no no no' actually meant 'yes yes.' As you can see these things do not seem amusing but when Shakespeare wrote 'Twelfth Night' for the Elizabethan audience, between 1600 and 1605 they were. ...read more.

Sir Toby is blatantly lying to Sir Andrew and as the audience can see this, Sir Andrew cannot. Sir Toby deceives his so-called 'friend' because Sir Andrew is incredibly rich and Sir Toby wishes to spend it all on alcohol. "Thou hadst need send for more money." In Act Five, Sir Toby's true sentiments are known. He admits his true feelings toward Sir Andrew, calling him 'an ass-head, and a coxcomb, (conceited fool), and a knave, a thin-faced knave, a gull.' In Act One, Scene Five, Shakespeare may be reminding the audience not to take 'Twelfth Night' too seriously, but to enjoy it as a comedy. At one point a line contains the subtitle of the play: "what you will" (whatever you like). The saying was in common use in Shakespeare's time. The second is when Sir Toby Belch says "Well, it's all one." It is the Elizabethan equivalent of 'So what,' or 'I couldn't care less.' The expression is used several times throughout the play. It echoes the subtitle of the play. Shakespeare did many things to ensure the play was seen as a comedy and not confused with a romantic or a history play and the way he did it was truly remarkable. I must say that Shakespeare was a great writer to do such a thing and to be able to fit everything in together and to perform so many jokes and tricks that don't confuse each other. Sara Moore 1 ...read more.