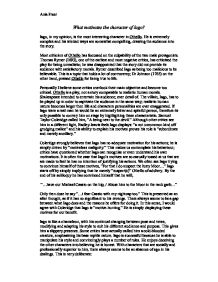 What motivates the character of Iago?

What motivates the character of Iago? Iago, in my opinion, is the most interesting character in Othello. He is extremely complex and his wicked ways are somewhat compelling, drawing the audience into the story. Most criticism of Othello has focussed on the culpability of the two male protagonists. Thomas Rymer (1693), one of the earliest and most negative critics, has criticized the play for being unrealistic; he was disappointed that the story did not provide its audience with satisfactory morals. Rymer described Iago as being too malicious to be believable. This is a topic that holds a lot of controversy; Dr Johnson (1765) on the other hand, praised Othello for being true to life. Personally I believe some critics overlook their main objective and become too critical. Othello is a play, not a story comparable to realistic human morals. Shakespeare intended to entertain his audience; ever detail of. The villain, Iago, has to be played up in order to captivate the audience in the same way; realistic human nature becomes larger then life and characters personalities are over exaggerated. If Iago were a real man he would be an extremely bitter and spiteful person, therefore its only possible to convey him on stage by highlighting these characteristic. Samuel Taylor Coleridge called him, "A being next to the devil." Although other critics see him in a different light, Badley-leavis feels Iago displays: "a not uncommon kind off grudging malice" and his ability to explain his motives proves his role is "subordinate and merely ancillary." ...read more.

(Danny Crutchley, Othellohall [Internet]) Ever since there have been numerous suggestions that Iago is driven by latent homosexuality, could this paranoia be his own frustration with not being able to accept his gay feelings? By creating these lucid affairs, he is simply masking his own fantasies. It seems as though Iago's main objective is to destroy Othello "I follow him to serve my turn upon him." It is also debatable that this envious hatred towards Othello is propelled by his own love for Desdemona. Although Iago blatantly admits he believes they are suited and make a happy couple "And I dare think he'll prove to Desdemona a dear husband," he cannot deny his love for her "Now I do love her too." This is Iago's primary motive in the original story of Hecatommithi by Giraldi Cinthio. The character of Iago is deeply in love with Desdemona, though when he finds out his love is not returned he destroying her. Shakespeare has modified and reshaped this story making the characters in his play more complex. Whether or not Shakespeare intended to keep Iago's objective the same, he has defiantly given the character reason to feel hostile towards the Moor. At first it looks as though Iago simply wants to take Cassio's place, although as the plot thickens and Iago admits: "I hate the Moor" we begin to think he simply wants to get closer to Othello, "Keep your friends close, but your enemies even closer" (Niccolo Machiavelli, "the prince"). ...read more.

Cassio is well educated "a mathematician" and from a higher social class. Othello had reason to choose Cassio, as he was his collaborator while he was courting Desdemona. It is reasonable to assume that it's because of these factors that Othello chose Cassio over Iago to be promoted; this alone gives Iago a strong motive to take revenge on Cassio, Desdemona and Othello. Empson's description also provides us with an Iago who is fundamentally honest, at least to himself, the audience, in his numerous soliloquise. "I think a queer kind of honesty is maintained in Iago through all the puzzles he contrives..." To Rodrigo, he displays his true feelings sincerely. This openness gives Iago the potential to win over the audience and almost lure them into understanding, if not liking, him. In my opinion it is possible to conclude that Iago's motivation lies not within one individual motivation but, as Bloom believes, in a collection of different ideas. I believe Coleridge's argument that Iago is a "motiveless malignancy" suggesting that he plays a mischievous evil character as a full time occupation, feasible though personally I feel there is more to his character. Though Iago's speeches and actions I find it more convincing to agree with Empson's class discrimination theory, it shows Iago having a strong reason for attacking Othello. Although Iago maybe evil and twisted, he is still a human. It would be wrong to believe that it's solely an evil nature that is responsible for his actions. Ania Freer ...read more.