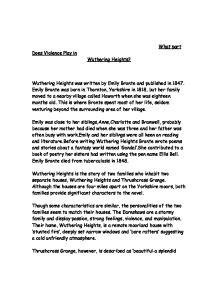 What part Does Violence Play in Wuthering Heights?

What part Does Violence Play in Wuthering Heights? Wuthering Heights was written by Emily Bronte and published in 1847. Emily Bronte was born in Thornton, Yorkshire in 1818, but her family moved to a nearby village called Haworth when she was eighteen months old. This is where Bronte spent most of her life, seldom venturing beyond the surrounding area of her village. Emily was close to her siblings,Anne,Charlotte and Branwell, probably because her mother had died when she was three and her father was often busy with work.Emily and her siblings were all keen on reading and literature.Before writing Wuthering Heights Bronte wrote poems and stories about a fantasy world named 'Gondal'.She contributed to a book of poetry her sisters had written using the pen name Ellis Bell. Emily Bronte died from tuberculosis in 1848. Wuthering Heights is the story of two families who inhabit two separate houses, Wuthering Heights and Thrushcross Grange. Although the houses are four miles apart on the Yorkshire moors, both families provide significant characters to the novel. ...read more.

Heathcliff stirs Lockwood's curiosity so much that he requests his house keeper Nelly Dean to tell him Heathcliff's story. At this point Nelly takes over the narration.At the end of the novel Mr. Lockwood returns to Wuthering Heights to find his landlord,Heathcliff, has died. There are many references to violence throughout Wuthering Heights. I'm going to concentrate on chapter 17 because it contains more violence than other chapters and also uses the ideas of both physical and mental violence. In chapter 17 Isabella's perspective is shown as she takes over the narration. She turns up at Thrushcross Grange wet, cold, bruised and bleeding. She describes to Nelly what has happened at Wuthering Heights. After Catherine's death Heathcliff is overcome with grief and harms himself. Isabella repulsed by Heathcliff's actions over Catherine, agrees to let Hindley lock Heathcliff out. However in this part of the novel Isabella shows no signs of violent inclinations and seemingly rejects the idea of using violence on Heathcliff 'you musn't touch him' . ...read more.

He becomes violent from an early age and grows up to be bitter and angry probably because of the degrading way he was treated as he got older. Violence plays a strong role in Wuthering Heights and without it I don't think the novel would have much impact on those who read it. Although there is a extensive amount of violence in Wuthering Heights it is not portrayed as anything out of the ordinary. The story is written as though violence is acceptable and is nothing to be shocked at. Violence is only mentioned as something unusual once in the whole novel by Nelly Dean in chapter in which she comments on the 'diabolical violence' Violence is used in Wuthering Heights to convey the emotions of the characters. The characters turn to violence when they feel anger, grief, betrayal, passion and other strong feelings. The use of violence in Wuthering Heights is not used to shock people. It is an essential theme in the novel and it is vital to the characters personalities that they use violence to express their emotions. ...read more.