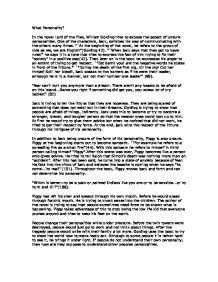 What Personality? In the novel Lord of the Flies, William Golding tries to expose the aspect of unsure personalities. One of the characters, Jack, switches his way of communicating with the others many times. "`At the beginning of the novel, he refers to the group of kids as we, we are English"'(Golding 42). "`When Jack says that they got to have rules"' he says it in a tone that tries to express the fact of him trying to fix their "society" in a positive way(42). Then later on in the book he expresses his anger to an extent of trying to get respect. `"Eat damn you! are the negative words he states in front of the littluns."' `"During the death of the first pig, kill the pig! Cut her throat! Spill her blood!, Jack speaks to the hunters as if he were their leader, although he is in a manner, but not their number one leader'" (69). "fear can't hurt you anymore than a dream. There aren't any beasts to be afraid of on this island...Serve you right if something did get you, you usless lot of cry babies!" (82) Jack is trying to tell the littuns that they are hopeless. They are being scared of something that does not exist but in their dreams. Golding is trying to show that people are afraid of things, indirectly. Jack uses this to become or try to become a stronger, braver, and tougher person so that the weaker ones could look up to him. At first he would try to give them advice but when he noticed that did not work, he tried to get their respect by force. At the end, jack wins the respect of the littluns through his intrigues of his personality. In addition to Jack being unsure of the form of his personality, Piggy is also unsure. Piggy at the beginning starts out to become sarcastic. ...read more.

All the boys in the book were symbols something which was unique. Ralph was the civil leader. Jack was the atavistic leader. Piggy was the rational thinker. Simon was the Christ figure. Roger was the evil assistant. As these boys are stranded on the island their personalities had shown. Although atavism won many battles, civility won the war. In Lord of the Flies I believe that William Golding is trying to prove that the flaws in human society are due to the flaws in human nature. Human society and human nature are both overflowing with Cruelty murder and corruption. Though some when they read the book Lord of the flies they see that even children are evil. There is much representation in this story. There is much symbolism in this book. The characters in the book represent aspects of human culture for example: Piggy (and Glasses) stand for Clear-sightedness, intelligence. Their state represents the status of social order. Ralph, The Conch stand for democracy and order, Simon Pure Goodness, "Christ Figure", Roger who is the evil and/or Satan, Jack the savagery, anarchy, The island a microcosm representing the world, the beast the evil residing within everyone, the dark side of human nature. There are many themes in this story such as The fear of the unknown can be a powerful force, which can turn you to either insight or hysteria, morals come directly from our surroundings, and if there is no civilization around us, we will lose these values, and finally You can only cover up inner savagery so long before it breaks out, given the right situation. In the first few chapters we see that the children are starting off trying to organize themselves. In chapter two we hear about how one of the little boys saw that there was a "snake beastie" in the darkness. When he brought this up at the meeting everyone except Simon is scared. ...read more.

Compassion is a sympathetic consciousness of others' distress together with a desire to alleviate it. Besides Simon, piggy was the most compassionate person. He was a guiding voice to the liluns even when they did not want one. He was kind to those who called him names. Even though he could be annoying at time his heart was always in the right place. The only reason he was not a leader and did not get the respect that he deserved was because of his weight and short stature .To Jack it was survival of the fittest. To him there should be no reason to help another, unless it benefited him. Compassion was lost for Jack after the death of a lilun in the fire that burned out of control. When Simon was killed he felt no remorse, all he felt was the beast inside. Telling him to keep hunting. That is how Jack copes with what is inside. Piggy's death meant little more than a red spot on the rocks. Jack was desensitized by killing pigs. His right hand man, who was even more sadistic and sick, was Rodger who flung the bolder which killed Piggy. No one seemed to notice accept for those in Ralph's camp. If it were not for their rescue Ralph would have snapped and lost all hope to survive and therefore become a savage, or be killed. Ralph, Piggy, and Jack are like pieces of a puzzle, when separated they make nothing, but united with one, goal turns them into what they needed what whole time, a good leader. Their strengths combined would make to be an ideal child. Ralph's need for structure would cancel out Jack's wild side. Piggy's compassion would help to guide the group as a whole off the island. Jack's leadership would unite them, and Ralph's perseverance would make sure that people stayed on the right track. That is the track that leads to Britain. This could not happen in this novel because of one thing the Beast. The fear for what is not known. ...read more.