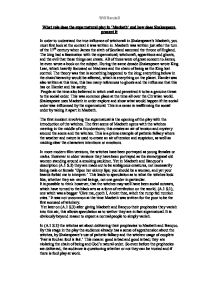 What role does the supernatural play in 'Macbeth'?

Will Randall What role does the supernatural play in 'Macbeth' and how does Shakespeare present it In order to understand the true influence of witchcraft in Shakespeare's Macbeth, you must first look at the context it was written in. Macbeth was written just after the turn of the 17th century when James the sixth of Scotland assumed the throne of England. The king had a fascination with the supernatural; witchcraft, apparitions and ghosts, and the evil that these things can create. All of these were of great concern to James, he even wrote a book on the subject. During the same decade Shakespeare wrote King Lear, which heavily focussed on Madness and the chain of being as the King lost control. The theory was that is something happened to the king; everything below in the chain/hierarchy would be affected, which is everything on the planet. Hamlet was also written at this time, this has many references to ghosts and the influence that this has on Hamlet and his sanity. People at the time also believed in witch craft and perceived it to be a genuine threat to the social order. ...read more.

They may have not gone into detail deliberately as a ploy to draw the un-suspecting Macbeth into their supernatural arena. The lack of instruction as well as detail, leads Macbeth's mind to wander dangerously. The excitement at the news is where the similarities between Banqou and Macbeth end. They are both examples of static and dynamic characterisation. Banquo is an example of static characterisation; he withstands the trial and remains pure throughout, he does not sink to sinful levels in order to make his prophecies become real. Where as Macbeth is an example of dynamic characterisation, he falls into illusion and loses his integrity, and commits to acts of sin by killing Duncan in order to complete his own set of prophecies. It is possible to think Macbeth would never have done this, unless the witches hadn't spoken to him, as he displayed no intention or malice in earlier scenes. Yet at the same time Macbeth overcomes his ambition for a while, and says he will not have 'a part in this.' It is Lady Macbeth, who after reading Macbeth's letter, talks him round to the murder. This indicates the supernatural did not influence Macbeth, but Lady Macbeth, another human. ...read more.

Will Randall It is true that the supernatural and witchcraft are thematically important throughout Macbeth, which is not uncommon in this chapter of Shakespeare's writing. Yet is Macbeth influenced? Both Macbeth and Lady Macbeth at various points along the way spoke to the spirit world. Lady Macbeth asks demonic spirits to possess her body and mind, and remove all human weakness. Lady Macbeth embraces the evil and allows herself to be influenced. At the start all be it for a short time, Macbeth rises above the predictions and tries to remain pure as Banquo did. Yet the crucial point is he could not ignore the visions of glory the witches put in his mind. All be it they did not instruct him to sin, this triggered his ambition 'I have no spur....but only/vaulting ambition.' The supernatural backdrop to the play intensifies our sense of evil; but does not dictate events. Macbeth is a free agent and has free will. There is no tragedy at all without the realisation that Macbeth has chosen his course of action, and each subsequent action is reaffirming the original decision, the bad choice. ...read more.