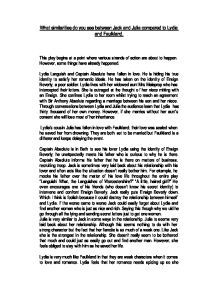 What similarities do you see between Jack and Julia compared to Lydia and Faulkland.

What similarities do you see between Jack and Julia compared to Lydia and Faulkland. This play begins at a point where various strands of action are about to happen. However, some things have already happened. Lydia Languish and Captain Absolute have fallen in love. He is hiding his true identity to satisfy her romantic ideals. He has taken on the identity of Ensign Beverly, a poor soldier. Lydia lives with her widowed aunt Mrs Malaprop who has intercepted their letters. She is outraged at the thought of her niece mixing with an Ensign. She confines Lydia to her room whilst trying to reach an agreement with Sir Anthony Absolute regarding a marriage between his son and her niece. Through conversations between Lydia and Julia the audience learn that Lydia has thirty thousand of her own money. However, if she marries without her aunt's consent she will lose most of her inheritance. ...read more.

Like Jack she is the strongest in the relationship. She doesn't really seem to be bothered that much and could just as easily go out and find another man. However, she feels obliged to stay with him as he saved her life. Lydia is very much like Faulkland in that they are weak characters when it comes to love and romance. Lydia feels that her romance needs spicing up so she creates a lover quarrel because Jack too supportive and gave in all the time. She did this to try and make the love stronger because she feels insecure about the relationship. Lydia has gone through extraordinary lengths for this argument to happen. Faulkland is a very nervous and insecure person who lacks confidence; Jack also feels that Faulklands fears are unfounded. Faulkland has exaggerated things out of all proportions. He fears for the life of Julia knowing that she is by herself. ...read more.

Lydia isn't quite as bad but her and Faulkland are very similar in that they need to be loved and need reassurance. Faulkland and Lydia are both very similar in that they both try to dominate and control the relationship but it doesn't always work. Faulkland gets angry and has a temper and keeps telling his that he loves her; he tries to persuade her and be nice to gain control. Whereas Lydia plays hard to get by telling Jack she won't speak to him again because of the letter. Lydia and faulkland are both similar because they are the most emotional of the pair. Compared to Lydia and Faulkland, Jack and Julia are completely different they are far more relaxed when it comes to love. Jack feels secure in his relationship and feels that they do not really need an argument to kick-start the relationship. Julia is also very secure but she does feel that she owes her lover something "debtor". Whilst Jack is almost a free man he doesn't owe anything apart from his father who he must do as he says. Opposites attract. ...read more.