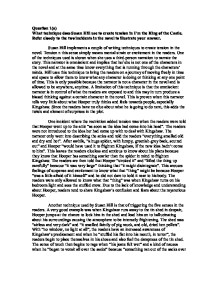 What technique does Susan Hill use to create tension in I'm the King of the Castle. Refer closely to the two incidents in the novel to illustrate your answer.

Question 1(a) What technique does Susan Hill use to create tension in I'm the King of the Castle. Refer closely to the two incidents in the novel to illustrate your answer. Susan Hill implements a couple of writing techniques to create tension in the novel. Tension n this sense simply means mental strain or excitement in the readers. One of the techniques used is shown when she uses a third-person narration to narrate the story. This narrator is omniscient and implies that he/ she is not one of the characters in the novel and at the same time know everything that is running through the characters' minds. Hill uses this technique to bring the readers on a journey of moving freely in time and space to allow them to know what any character is doing or thinking at any one point of time. ...read more.

The narrator only went into describing the attics and told the readers "everything smelled old and dry and hot". After awhile, "a huge spider, with lumpy, greenish-grey back, scutted out" and Hooper "would have used it to frighten Kingshaw, if the new idea hadn't come to him". This leaves the readers clueless and anxious to know about his plans because they know that Hooper has something scarier than the spider in mind to frighten Kingshaw. The readers are then told that Hooper "stroked it" and "lifted the thing up carefully" because "it was very large" thinking that "it might disintegrate". This arouses feelings of suspense and excitement to know what that "thing" might be because Hooper "was a little afraid of it himself" and he did not dare to hold it near to his body. ...read more.

The sense of touch then begins to rage when "his jeans felt wet" and a kind of nausea when he "began to vomit all over the sacks" because "something ran out of the sacks over his hands". Kingshaw's trauma also haunts him in his slumber through the Punch and Judy show and after he wakes up, Hooper starts to scare him with descriptions of anonymous creatures that may be in the dark shed with him. All these would leave any 10-year old boy to panic when imprisoned in total darkness, especially the claustrophobic Kingshaw. Kingshaw screamed and beats the metal walls until his hands bled. The tension reaches the apogee as his situation was so realistic towards the readers when they already sympathise with Kingshaw so much at this later part of the book. Hence we can see very clearly that Susan Hill's implementation of techniques in involving the readers' emotions are very successful. Done By: Ng Wan-Yi Delia (26) Sec 4C2.2 ...read more.