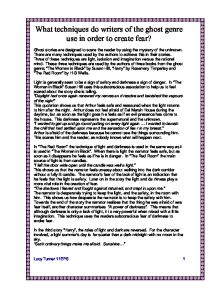 What techniques do writers of the ghost genre use in order to create fear?

What techniques do writers of the ghost genre use in order to create fear? Ghost stories are designed to scare the reader by using the mystery of the unknown. There are many techniques used by the authors to achieve this in their stories. Three of these techniques are light, isolation and imagination versus the rational mind. These three techniques are used by the authors of three books from the ghost genre; "The Woman in Black" by Susan Hill, "Harry" by Rosemary Timperley and "The Red Room" by H G Wells. Light is generally seen to be a sign of safety and darkness a sign of danger. In "The Woman in Black" Susan Hill uses this subconscious association to help us to feel scared about the story she is telling. "Daylight had once again renewed my nerves and resolve and banished the vapours of the night" This quotation shows us that Arthur feels safe and reassured when the light returns to him after the night. Arthur does not feel afraid of Eel Marsh House during the daytime, but as soon as the light goes he feels as if an evil presence has come to the house. ...read more.

The technique of isolation is also used in "Harry", but it is not as obvious as it is in "The Woman in Black". The first type of isolation that is used is the physical isolation between the family and the neighbourhood. The family are new to the area, so they do not know anybody well. The child, Christine, has no friends so she plays on her own with Harry. "She hasn't any brothers or sisters. She hasn't any friends of her own age." "We're new to the neighbourhood, you see" The second type of isolation used is the mental isolation of the mother. As she is not Christine's real mother, she feels as if she is not connected to Christine. "More so than if I was her real mother" Also the mother feels isolated because she is the only person who thinks that there is anything wrong. All of the people around her think that Christine is going through a phase, but the mother feels that something is wrong. "I didn't mention any of this to Jim that night. I knew he would only scoff as he'd done before." ...read more.