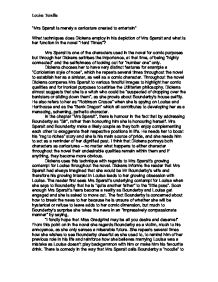 What techniques does Dickens employ in his depiction of Mrs Sparsit and what is her function in the novel &quot;Hard Times&quot;?

"Mrs Sparsit is merely a caricature created to entertain" What techniques does Dickens employ in his depiction of Mrs Sparsit and what is her function in the novel "Hard Times"? Mrs Sparsit is one of the characters used in the novel for comic purposes but through her Dickens satirises the importance, at that time, of being "highly connected" and the selfishness of looking out for "number one" only. Dickens chooses her to have very distinct features for example a "Coriolanian style of nose", which he repeats several times throughout the novel to establish her as a sinister, as well as a comic character. Throughout the novel Dickens compares Mrs Sparsit to various fanciful images to highlight her comic qualities and for ironical purposes to satirise the Utilitarian philosophy. Dickens almost suggests that she is a witch who could be "suspected of dropping over the banisters or sliding down them", as she prowls about Bounderby's house swiftly. ...read more.

From this point on in the novel she regards Bounderby as a victim, much to his annoyance, as she only senses a miserable future. She repeats several times how she wishes to see Bounderby cheerful as she used to, to remind him of her previous role in his life and reinforce how she believes marrying Louisa was a mistake as Louisa doesn't play backgammon with him or make him his favourite drink. There is comedy in the way that Mrs Sparsit calls Bounderby a "noodle" to his portrait to emphasis the pity she has for him for entering into such a marriage. Whenever in the presence of Louisa she refuses to call her Mrs Bounderby, but prefers to call her Miss Gradgrind which is very insulting as Louisa is no longer a child but Bounderby's wife. She takes on a role in front of Louisa as a humble woman for example by kissing Bounderby's hand and calling him her "benefactor" but this is a technique by Dickens to exaggerate her character and make her more irritating. ...read more.

Mrs Sparsit's fascination with Louisa on the "brink of the abyss" reaches new heights in "Lower and Lower" as she tries to play detective in the Harthouse-Louisa mystery. This chapter is very comic as well as melodramatic. Again her caricature dimension is reinforced when she accepts Mr Bounderby's invitation to his house with, "your will is to me a law", and stating her pity for him and urging him to "be buoyant". Dickens describes her as "pouncing", "darting" and "diving" when chasing Louisa and he engages the reader in Mrs Sparsit's thoughts of urgency as she asks herself, "Where will she wait for him?" "Where will they go together?" Her swift moves, occasional outbursts and final breakdown, "burst into tears of bitterness", could be described as melodramatic but I think it is necessary, for it Dickens to mimic and satirise the women who was "well born" and who is know running around in the rain acting like a "Robinson Crusoe". It amplifies how far she has fallen down the social ladder and allows Dickens to show how he believes that placing such importance on people with wealthy backgrounds is misplaced. Louise Terallis ...read more.