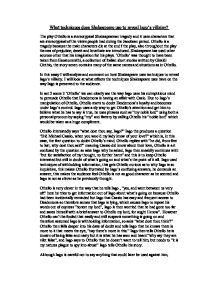 What techniques does Shakespeare use to reveal Iago's villainy?

What techniques does Shakespeare use to reveal Iago's villainy? The play Othello is a stereotypical Shakespearean tragedy and it uses characters that are stereotypical of the views people had during the Jacobean period. Othello is a tragedy because the main characters die at the end f the play, also throughout the play themes of prejudice; deceit and love/hate are introduced. Shakespeare has used other sources other that his imagination for his plays. 'Othello' was thought to have been taken from Hecatommithi, a collection of Italian short stories written by Giraldi Cinthio, the story seven contains many of the same names and situations as in Othello. In this essay I will analyze and comment on how Shakespeare uses techniques to reveal Iago's villainy. I will look at what effects the techniques Shakespeare uses have on the way Iago is presented to the audience. In act 2 scene 3 'Othello' we can clearly see the way Iago uses his surreptitious mind to persuade Othello that Desdemona is having an affair with Casio. Due to Iago's manipulation of Othello, Othello starts to doubt Desdemona's loyalty and becomes under Iago's control. Iago uses a sly way to get Othello's attention and get him to believe what he has to say is true, he uses phrases such as "my noble lord" using both a personal pronoun by saying "my" and flattery by calling Othello his "noble lord" which would be taken as a huge compliment. ...read more.

This makes the readers feel slightly intimidated by the character Iago; he is cunning and devious and is very clever at carrying out his plans toward Othello. Shakespeare uses specific techniques to show that the manipulation of other characters by Iago. Iago makes the characters in the play believe he is honest when in fact he is deceiving them and is going behind their backs to turn others against them. For example, in act 3 scene 3 "my noble lord". Iago is gaining Othello's trust by using personal pronouns and addressing him as if they were the best of friends. By gaining Othello's trust, Iago thinks Othello will listen to him more and is more likely to believe what he is saying. By having this advantage of being able to influence what Othello does and says, the other characters wouldn't know what Iago is doing; but with Othello being in charge, Iago technically has control over the other characters by being able to influence Othello's decisions. He later then says "o beware, my lord of jealousy" in this statement Iago is making Othello think about Cassio trying to get with Desdemona because he is jealous of Othello and Desdemona's relationship. One of Iago's techniques is to find the characters' weaknesses and use it against them. One example of this is when Iago discovers Cassio's weakness was alcohol; Cassio leaves Iago on his own, this gives him time to explain to the audience what he is planning to do. ...read more.

Iago is clever by covering his deception by never saying anything that he would think Othello would take offence to or not believe, he only says things he knows Othello is thinking anyway so he doesn't get himself into trouble, he never even suggests anything he just presents them as mere ideas so people have nothing to blame on him later on it the play " to grosses issues, nor larger reach than to suspicion" Iago is urging Othello to take a different course of action in certainty he is only planting the idea in his mind. Racism and prejudice would be a difficult theme to portray if Iago's villainy was revealed at the beginning, Othello would never befriend a known villain because he is hated enough for his race, he feels alien to Desdemona and his other characters n the play, "his own clime, complexion and degree", this makes Othello feel alienated, "set on thy wife", Othello has moved from feeling fine to feeling low, he sunk very quickly after Iago mentioned he is different to Desdemona, he took things to heart easily and took offence very easily. Until the end, Othello has no suspicion towards Iago's villainy, this is strange as Iago is trying to turn Othello against his beloved wife, he tries to imply this has cheated on him, he is jealous and he is imagining things, all false accusations, yet Othello notices nothing, because of the repeated use of the word honest when talking about Iago. ?? ?? ?? ?? ...read more.

This essay engages adequately to the question, yet tends to retell the plot at times. It is evident from the introduction that this essay isn't the strongest, which isn't the position you want to put the marker in before they've ...

This essay engages adequately to the question, yet tends to retell the plot at times. It is evident from the introduction that this essay isn't the strongest, which isn't the position you want to put the marker in before they've even read the rest! There is a lot of unnecessary bolted context such as "views of Italian men". Yes, if this was woven into why Iago is a villain, that would've been strong. However, it is not and just loses focus.

The analysis in this essay is weak. My major query is that they write the whole essay as if the characters are making their own decisions. I remember this being a major issue with some when moving up to GCSE level, but it's key to refer to Shakespeare's constructions. By talking about Shakespeare's choices of making Iago a villain, you will naturally discuss why he has chosen to do so and the effect on the reader. Without such style, it will always fail to reach the top marks. Quotes are well embedded which was nice to see, and sometimes language is closely analysed. When talking about Iago, I would always focus on imagery, and in particular satanic or poisonous themes. It would've been better if this essay could've used a few more technical terms. I would've liked to have seen Iago's soliloquies explicitly mentioned, as these are key to showing his villainy. Audience response is mentioned four times in this essay, whereas it should be thoroughly explored.

The essay has an okay structure, but the introduction is awful. There is no need to bolt on a paragraph of context about Shakespeare's time of writing, and the paragraph saying "I will" is highly unsophisticated. A good introduction should get right to the point. I presume this has been entered by an American, but it's annoying to see "analyze" or "prioritize" in an English Literature essay!