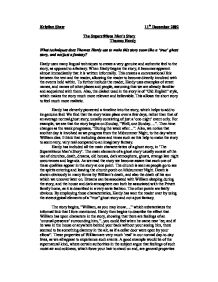 What techniques does Thomas Hardy use to make this story seem like a 'true' ghost story, and not just a fantasy? The superstitious man's story

Kristian Shaw 11th December 2002 The Superstitious Man's Story Thomas Hardy What techniques does Thomas Hardy use to make this story seem like a 'true' ghost story, and not just a fantasy? Hardy uses many lingual techniques to create a very genuine and authentic feel to the story, as opposed to a fantasy. When Hardy begins the story, it becomes apparent almost immediately that it is written informally. This creates a conversational link between the text and the reader, allowing the reader to become directly involved with the events held within. To further include the reader, Hardy uses examples of street names, and names of other places and people, assuming that we are already familiar and acquainted with them. Also, the dialect used in the story is of "Old English" style, which makes the story much more relevant and believable. This allows the short story to feel much more realistic. Hardy has cleverly pioneered a timeline into the story, which helps to add to its genuine feel. We find that the story takes place over a few days, rather than that of an average normal ghost story, usually consisting of just a 'one-night' event only. For example, we see that the story begins on Sunday, "Well, one Sunday....". ...read more.

Hardy then begins to set the scene for what we are about to approach in the story. He refers to two members of the village as "Mr and Mrs Hardcome". This demonstrates that the reader knows of the particular individuals mentioned. Informality of this kind is shown once again when Hardy informs us that Mrs Privett is out and that "she met Jim Weedle's daughter Nancy". This again could be interpreted as a form of name dropping to support the reliability of the information source. In human nature we use names to allow people to refer to certain places and people quickly, and to allow visualisation of other people and places. Even many, many years ago, names were given to even early man, in the form of grunts or dog-like barks. Names are an important aspect of our lives, so therefore they are an important aspect of the story. Which as referred to above, as an important point of life, language and culture, they help to introduce a convincing portion of believability. To even greater extend this level of authenticity, Hardy includes information that informs us of basic facts about the surroundings or settings of certain places. For example, we learn that William's house only has one room to pass through to leave the house from the stairs: "...this being the only way from the staircase to the outside of the house". ...read more.

It is then that John "looked towards his fellow-mower he saw one of those great white miller's-souls as we call 'em - that is to say, a miller-moth - come from William's open mouth as he slept". This presents a visual image of William's soul leaving his body. We then see John, as all human beings, trying to create a reason for the miller-moth leaving William using logic. He puts it down to working in the mill for several years. Trying to use common sense to sort out any paranormal activity is what most people do when faced with tough situations that they cannot understand or handle, so this allows the story to progress as a "true" ghost story. Tragedy ensues when the reader discovers that William has died. But the true tragedy of the story is unfolded as we realize that Philip Hookhorn had seen William at a spring at the time when he supposedly died, not only that, but the past misfortune that William had encountered becomes apparent. "...for years before that time, William's little son - his only child - had been drowned in that spring, while at play there". This ends the story on a distressing and depressing note. A point that I feel relevant is that life itself is a tragedy. I believe that this story reflects this, and makes it all-the-more like a "true" ghost story as opposed to a fantasy. ...read more.