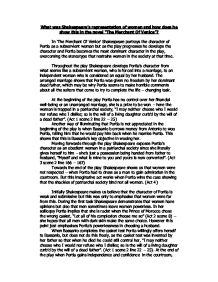 What was Shakespeare's representation of women and how does he show this in the novel &quot;The Merchant Of Venice&quot;?

What was Shakespeare's representation of women and how does he show this in the novel "The Merchant Of Venice"? In 'The Merchant Of Venice' Shakespeare portrays the character of Portia as a subservient woman but as the play progresses he develops the character and Portia becomes the most dominant character in the play, overcoming the stereotype that restrains women in the society at that time. Throughout the play Shakespeare develops Portia's character from what seems like a subservient woman, who is forced into a marriage, to an independent woman who is considered an equal by her husband. The arranged marriage shows that Portia was given no freedom by her dominant dead father, which may be why Portia seems to make horrible comments about all the suitors that come to try to complete the life - changing task. At the beginning of the play Portia has no control over her financial well-being or an unarranged marriage, she is a prize to be won - here the woman is trapped in a patriarchal society, "I may neither choose who I would nor refuse who I dislike; so is the will of a living daughter curb'd by the will of a dead father". (Act 1 scene 2 line 22 - 25) ...read more.

However I think that by the end of the play, a schoolgirl crush, which I can tell from the way Portia remembers Bassanio immediately (Act 1), has turned into love, which is why Portia forgives him. Portia frees herself from being a possession by inventing her own task (the ring task). When Bassanio fails this test, the effects only seem to strengthen their relationship and by the end of the play Portia freely gives herself to Bassanio and therefore has a lot more freedom. By the end of the play, Shakespeare has left Bassanio in a position where Portia has Bassanio begging at her feet, asking her not to divorce him (Act 5 scene 1 line 199 - 231). Shakespeare manages to create this situation by developing Portia's character to shows choice, authority and feminism by forming her own special task where she can show that her character is strong and assertive. She also dresses as a man to gain respect - Portia demonstrates independence, wit, skill and shows she is learned when she outsmarts all the men in the courtroom. This imaginative act works when Portia wins the case showing that the shackles of patriarchal society bind not all women. (Act 4) Portia's confidence and language changes slightly in the courtroom as well. ...read more.

Shakespeare used exactly the same method to free Jessica from the shackles of patriarchal society for example, when Jessica created the ring test. By the end of the play both the main female characters, Jessica and Portia had much more freedom and seemed much more opinionated than at the beginning when both were 'owned' by their father's who didn't appreciate their potential. My first impression of women in the time of Shakespeare and in the play was that they were of great importance, even after reading The Merchant Of Venice. The main reason I thought that women were held in great esteem was because the greatest Queen who ever ruled England (Queen Elizabeth) was at the throne at the time. Also because after reading The Merchant Of Venice for the first time I thought that Portia was admired and was free/ independent. But after studying the text more closely and looking for evidence of this conclusion I realised that most women were dependant on men and that strong female characters, such as Portia, were great role models but were the minority in the female population. Finally, I think women weren't given many opportunities and had to suffer under many constraints at that time e.g. that women were mainly controlled by their father's or 'the man of the house' - this was due to the stereotype that all women should stay at home and cook, clean and look after the children. By Amber Woodhams, 10 More ...read more.