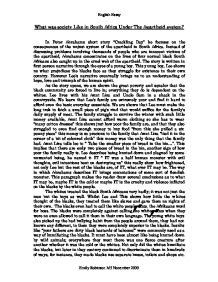 What was society Like in South Africa Under The Apartheid system? - Peter Abrahams short story &quot;Crackling Day&quot;.

What was society Like in South Africa Under The Apartheid system? In Peter Abrahams short story "Crackling Day" he focuses on the consequences of the unjust system of the apartheid in South Africa. Instead of discussing problems involving thousands of people who are innocent victims of the apartheid, Abrahams concentrates on the lives of four normal black South Africans also caught up in the cruel web of the apartheid. The story is written in first person narrative through the eyes of a young boy. This young boy, Lee shows us what prejudices the blacks face as they struggle for existence in their own country. However Lee's narrative eventually brings us to an understanding of hope, love and triumph of the human spirit. As the story opens, we are shown the great poverty and squalor that the black community are forced to live in; everything they do is dependent on the whites. Lee lives with his Aunt Liza and Uncle Sam in a shack in the countryside. We learn that Lee's family are extremely poor and find it hard to afford even the basic everyday essentials. We are shown that Lee must make the long trek to fetch a small piece of pig's rind that would suffice for the family's daily supply of meat. ...read more.

" Teach him Sam. If you and he are to live here, you must teach him". There are many injustices in the apartheid system, for instance in the story Lee and Andreis had to walk what was probably many miles in the freezing cold, with bare feet, just to collect a tiny piece of pig's rind. At one point Lee says" The cold was not so terrible on bare feet if one did not keep still" this shows that lee did not even have shoes, if he had been white he would have been able to afford basic essentials like shoes and clothing. If it had been the whites that were getting the pig's rind, which they never would but they would probably have not have had to walk, and certainly not in bare feet. The whites would have been able to afford a shoes and maybe a car, a privilege that the blacks could not afford. If Lee had been a white boy he would have been at school, getting an education As Lee is black though he was thought to only need a minimal education if any, when Lee was older he would probably become a farm worker and would become like a slave to a white person Lee would not ...read more.

We know that Sam is feeling very guilty because he buys Lee an orange, a bag of boiled sweets and an old tatty picture book. These gifts are not worth very much financially but sentimentally these small gifts give Lee the reassurance that he needs to be able to trust Sam again, a person he thought cared about him. In the story there is hope that the cruel apartheid system will eventually be defeated. At the end of the story Sam says "One day..." this phrase is ambiguous, there are many things that could be said after those two words, for instance "one day the world will be equal" or "One day We will have justice and overcome the whites" but Liza interrupts and Sam breaks of, Abrahams has left dots here to encourage us the reader to think for ourselves and discover the true meaning of this story. The family know that there are stronger things than hate and evil, like love and hope. The whites have somehow come to feel superior and have gained power that is not theirs; they do not even let the native people of their own country speak their own language. Overall the story implies that with Lee's courage and Aunt Liza's strength that there will be a different South Africa in times to come. ?? ?? ?? ?? English Essay Emily Robinson M5 November 2000 ...read more.