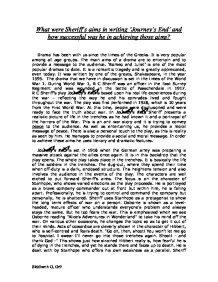 What were Sheriff's aims in writing 'Journey's End' and how successful was he in achieving those aims?

What were Sheriff's aims in writing 'Journey's End' and how successful was he in achieving those aims? Drama has been with us since the times of the Greeks. It is very popular among all age groups. The main aims of a drama are to entertain and to provide a message to the audience. 'Romeo and Juliet' is one of the most popular dramas to date. It is a romantic tragedy and is greatly appreciated, even today. It was written by one of the greats, Shakespeare, in the year 1595. The drama that we have in discussion is set in the times of the World War 1. During World War 1, R C Sheriff was an officer in the East Surrey Regiment and was wounded in the battle of Passchendale in 1917. R C Sheriff's play Journey's End is based upon his real life experiences during the war - reflecting the way he and his comrades lived and fought throughout the war. The play was first performed in 1928, which is 10 years from the First World War. At this time, people were disillusioned and were ready to face the truth about war. In Journey's End, Sheriff presents a realistic picture of life in the trenches as he had known it and a portrayal of the horrors of the War. ...read more.

This gives us a feeling that the officers thought of themselves as different from the men. Sheriff very cleverly shows the class difference during the time. The whole play takes place in a span of 3 days. It is an irony that Stanhope lives through the trenches for 3 years while Raleigh, the boy with everything to live for, dies within 3 days. Sheriff emphasizes the irony of death - sometimes a man survives luckily for years while others are fated to die immediately, as in the case of Stanhope and Raleigh. The underlying purpose of the play was to entertain the audience. Sheriff has accomplished this successfully. He keeps the audience entertained by the use of tension. The sound effects are very effective in creating tension. Most of the time, there is silence, then there are loud noises when bombarding. There are extreme sounds and then nothing. Sheriff also uses complex characterization to keep the audience involved. Every character in the play is very different from the other. They all combine together to make one successful play. Trotter and Mason always keep the audience entertained as they are the very source of humour. Black humour is often used in the course of the play. ...read more.

The pauses show that the characters are hesitant. It also highlights stress. R C Sheriff's aims were to provide a moral message of peace, to entertain the audience, to show the true horrors of the war as seen by him and to present a structures piece of drama. He has been very successful in fulfilling those aims. "Very faintly there comes the dull rattle of machine guns and the fevered spatter of rifle fire". These are the last words of the play wherein Sheriff is trying to show that no matter how many people die, the war continued. To the audience watching the play either in 1929 or today, the character of Raleigh epitomises the young men who died in their hundreds of thousands in the Great War. Sheriff wanted to get across the message that war is not about glory, but about horror and suffering. You will gain nothing and lose everything. I think that this play would have made a great impact on the audience, considering the fact that it was made 10 years after the First World War. It is a very effective play for the subsequent generations as it stresses on world peace. The UN at the moment is doing a great job at maintaining peace in the world and hope is that it will continue. ?? ?? ?? ?? Siddharth G, Gr9 ...read more.