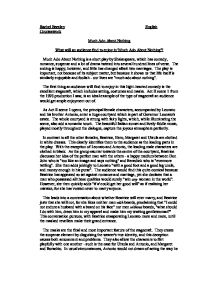 What will an audience find to enjoy in 'Much Ado About Nothing'?

Rachel Beesley English Courssework Much Ado About Nothing What will an audience find to enjoy in 'Much Ado About Nothing'? Much Ado About Nothing is a short play by Shakespeare, which has comedy, romance, suspense and a lot of drama twisted into several hundred lines of verse. The ending is happy, however, and little has changed albeit two marriages. The play is important, not because of its subject matter, but because it shows us that life itself is similarly enjoyable and foolish - our lives are "much ado about nothing". The first thing an audience will find to enjoy in this light-hearted comedy is the excellent stagecraft, which includes setting, costumes and masks. Act II scene 1 from the 1993 production I saw, is an ideal example of the type of stagecraft an audience would get ample enjoyment out of. As Act II scene 1 opens, the principal female characters, accompanied by Leonato and his brother Antonio, enter a huge courtyard which is part of Governor Leonato's estate. The whole courtyard is strung with fairy lights, which, while illuminating the scene, also add a romantic touch. The beautiful Italian sunset and lively fiddle music, played mostly throughout the dialogue, capture the joyous atmosphere perfectly. In contrast to all the other females, Beatrice, Hero, Margaret and Ursula are clothed in white dresses. This clearly identifies them to the audience as the leading parts in the play. With the exception of Leonato and Antonio, the leading male characters are clothed in black. As the group saunter towards the centre of the courtyard, Beatrice discusses her idea of the perfect man with the others - a happy medium between Don John who is "too like an image and says nothing" and Benedick who is "evermore tattling". She then adds jokingly to Leonato "with a good foot and a good leg uncle, and money enough in his purse". ...read more.

The words "I do spy some marks of love in her" make the audience laugh because they know that Beatrice is not in love with Benedick in the slightest. He runs back to the fountain and attempts to strike a gallant, sexy pose. On his face is painted a grin that is trying to convey gallantry, romance, intelligence and wit all at the same time. To the audience he looks ridiculous, and even more so when Beatrice just looks at him stonily and says, "Against my will I am sent to bid you come in to dinner." Benedick, infatuated with his new love, carries on the conversation being complimentary and not at all taunting or rude towards Beatrice, who cannot understand this sudden change in character. Instead of retaliating to her sarcastic remark, he laughs, thinking she's hilarious. Beatrice, on the other hand, thinks he is certifiable. After she has stormed off back down Orchard Alley, Benedick replays the conversation, reinterpreting all of her words and actions as signs of her love for him. From "Against my will I am sent to bid you come in to dinner" he concludes: "there's a double meaning in that". The love-struck Benedick and the hostile Beatrice display makes very enjoyable viewing for the audience. Act III scene 1 is another chance for the audience to enjoy the comedy because it shows Hero and Margaret playing the same trick on Beatrice. As soon as the duo see Beatrice powering down the path, they launch into their carefully prepared dialogue. To grasp Beatrice's attention, Ursula says in a practically shouts at Hero, "But are you sure, that Benedick loves Beatrice so entirely?" which works very well as Beatrice stops dead in her tracks, eyes on stalks. The look of total shock that diffuses over her face is comical in contrast to her expression of perturbation just seconds before. What is chiefly funny about this scene is Beatrice's reactions to the truths about herself which she learns from listening to Hero and Ursula. ...read more.

The mood of the scene changes again as she replies solemnly and slowly, "Yea, as sure as I have a thought, or a soul." Benedick realises all her hysteria has ebbed away and she is not just wildly thinking in the heat of the moment; she is serious. Upon hearing this, Benedick changes his mind and agrees to challenge Claudio. Not just for the wrong he has done Hero, but because his love for Beatrice is so strong. The audience will enjoy the powerful contrasts of love and anger in this scene. However, although the audience will be glad that Beatrice and Benedick are back together, the tension mounts again, as they think that real tragedy could strike and if Benedick does kill Claudio, it would ruin everything for the main characters. By killing Claudio, Benedick could also kill Hero; to have another huge shock so soon after her traumatic experience could well mean that she could die from shock and anguish, or possibly even take her own life. That would have a grievous affect Leonato, Beatrice, Antonio, Ursula and Margaret, and also, by killing Claudio, Benedick is putting himself in a vulnerable position, for he too could be killed. There are numerous repercussions this action against Claudio would produce, and none of them advantageous. But, as it is a comedy, everything turns out well and Hero and Claudio are eventually happily reunited. At first I was inclined to think that Much Ado About Nothing would be a lot of tedious work, as I am not particularly a fan of Shakespeare, but I have thoroughly enjoyed reading it and I am very glad that I was able to see the 1993 film version. The film was directed in such a way that you could easily understand and not help getting drawn into the plot. I most enjoyed following the relationship of the play's two protagonists, Beatrice and Benedick, and watching them grow as characters. I can say with no hesitation that this comedy is my favourite play by Shakespeare! ...read more.