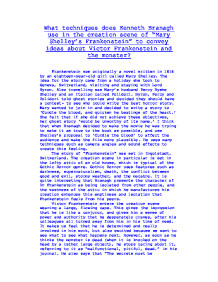 Whattechniques does Kenneth Branagh use in the creation scene of &quot;Mary Shelley'sFrankenstein&quot; to convey ideas about Victor Frankenstein and the monster?

What techniques does Kenneth Branagh use in the creation scene of "Mary Shelley's Frankenstein" to convey ideas about Victor Frankenstein and the monster? Frankenstein was originally a novel written in 1816 by an eighteen-year-old girl called Mary Shelley. The idea for the story came from a holiday she took to Geneva, Switzerland, visiting and staying with Lord Byron. Also travelling was Mary's husband Percy Byshe Shelley and an Italian called Polidori. Byron, Percy and Polidori told ghost stories and decided they should have a contest- to see who could write the best horror story. Mary wanted to join in and decided to write a story to 'Curdle the blood, and quicken he beatings of the heart.' She felt that if she did not achieve these objectives, her ghost story 'would be unworthy of its name.' I think that when Branagh decided to make the movie he was trying to make it as true to the book as possible, and use Shelley's proposal to 'Curdle the blood' to affect the audience and make the film more plausible. He uses many techniques such as camera angles and sound effects to create this feeling. The story of "Frankenstein" was set in Ingolstadt, Switzerland. ...read more.

He says, "Shame on you, Victor Frankenstein of Geneva, God help your loved ones" and "Evil stitched to evil stitched to evil", implying that what Victor has done is immoral and he is creating a body of immense horror and evil. It also creates sympathy for the monster. The audience is made to feel that Frankenstein himself is evil, for playing with life and mocking God. The sounds made by the monster are similar to those made by wild animals, but also they sound like the monster is in pain, which would make sense as Frankenstein has just rejected him. We see Frankenstein's former professor talking through a gate. This signifies the difference of opinion and belief between the two doctors. Sound effects are used very well in the creation scene, especially the non-diagetic musical score that has been added. It is mainly in a minor key, but has drastic changes to a major key when there is extra tension in the frame. It creates a build up, and when there is suddenly a pause with no music, tension is created, then when something dramatic happens, the audience shows a greater reaction. The use of diagetic and non-diagetic sound is very good in this scene, for example when the electrical probes go into the monster's feet and there is the sound of crunching bone. ...read more.

This is ironic as most of the monster was made of murderers and criminals- hardly perfect people. The editing in the creation scene is very clever, I have previously mentioned the lecturer being super-imposed over a frame; there is also the part where all the scientific equipment is displayed. One shot dissolves into another, which resembles them being combined together to make the monster. The pace in the scene changes from being very fast when Frankenstein is giving the monster life, to a lot slower when the monster is "born" and trying to stand up. Overall, I think that Branagh has made the film much more appealing to the audience by using the effects available to him. He uses location, costume, characterisation, dialogue, sound effects, camera angles. Shot types, visual effects, editing, and pace to make a very effective film. I am most impressed by the way he read between the lines of the Mary Shelley novel to give the audience lots to think about. I also liked the way he used discreet blasphemy to show that what Victor Frankenstein was doing was immoral and mocking God. I think that Branagh has more than done justice to the Shelley novel. ...read more.