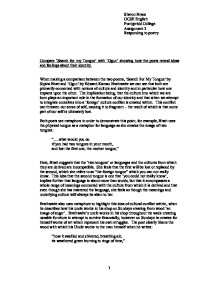 When making a comparison between the two poems, 'Search For My Tongue' by Sujata Bhatt and 'Ogun' by Edward Kamau Brathwaite we can see that both are primarily concerned with notions of culture and identity and in particular how one impacts

Compare 'Search for my Tongue' with 'Ogun' showing how the poets reveal ideas and feelings about their identity. When making a comparison between the two poems, 'Search For My Tongue' by Sujata Bhatt and 'Ogun' by Edward Kamau Brathwaite we can see that both are primarily concerned with notions of culture and identity and in particular how one impacts upon the other. The implication being, that the culture into which we are born plays an important role in the formation of our identity and that when we attempt to integrate ourselves into a 'foreign' culture conflict is created within. This conflict can threaten our sense of self, causing it to fragment - the result of which is that some part of our self is ultimately lost. Both poets use metaphors in order to demonstrate this point, for example, Bhatt uses the physical tongue as a metaphor for language as she creates the image of two tongues: "....what would you do if you had two tongues in your mouth, and lost the first one, the mother tongue," Here, Bhatt suggests that the 'two tongues' or languages and the cultures from which they are derived are incompatible. ...read more.

For example, the use of enjambment in Brathwaitte's poem causes the sense of each verse to rush forward from one to the next without pause and thus one has the feeling of an angry rant. For example: "The knuckles of his hands were sil- vered knobs of nails hit, hurt flat- ened out with blast of heavy hammer." Despite being a fine craftsman, Brathwaitte's uncle is poor and hungry as people are not buying his furniture. In describing the physical appearance of the furniture 'the world preferred', Brathwaitte also appears to be describing how he sees the people who prefer it. "...spine-curving chairs made up of tubes, with hollow steel-like bird bones that sat on rubber ploughs," These words, 'spine-curving' supply an image of discomfit, whilst the terms, 'hollow' and 'steel-like' give us the idea of people who are shallow, hard and cold. Brathwaitte is obviously angry at these people who do not value his uncle's work and in doing so, it seems to appear to him that they also devalue his uncle's worth. Bhatt's poem however, appears less angry and more conversational. ...read more.

When talking of the mother tongue which she was afraid, "would rot and die" she tells us that it in her dreams it does in fact re-grow. In relation to this tongue she writes, "it ties the other tongue in knots," thus giving us the sense that this part of her is victorious rather than lost. Thus in making a comparison of the two poems, 'Search For My Tongue' and 'Ogun' we can see that though the poems are similar in their views of the possible threat integration with 'foreign' cultures poses to our sense of self, and the use they make of metaphor to demonstrate the conflict this presents within us, contrast can be found in the general tone of the writing. In the case of Bhatt's poem there is the implication of growth and blossoming, whereas in Brathwaitte's poem there is much more anger at the loss of cultural identity and implies the loss of part of one's self as the ultimate outcome. ?? ?? ?? ?? Sharon Brace GCSE English Pontypridd College Assignment 2 Responding to poetry 1 ...read more.