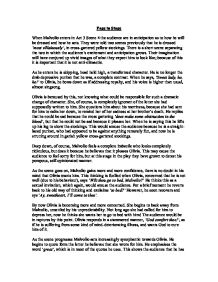 When Malvolio enters in Act 3 Scene 4 the audience are in anticipation as to how he will be dressed and how he acts.

Page to Stage When Malvolio enters in Act 3 Scene 4 the audience are in anticipation as to how he will be dressed and how he acts. They were told two scenes previously that he is dressed 'most villainously', in cross-gartered yellow stockings. There is a short scene separating the two in which the audience's excitement and anticipation grows. Their imagination will have conjured up vivid images of what they expect him to look like; because of this it is important that it is not anti-climactic. As he enters he is skipping, head held high, a transformed character. He is no longer the drab depressive puritan that he was, a complete contrast. When he says, 'Sweet lady, ho, ho!' to Olivia, he bows down as if addressing royalty, and his voice is higher than usual, almost singsong. ...read more.

Deep down, of course, Malvolio feels a complete imbecile who looks completely ridiculous, but does it because he believes that it pleases Olivia. This may cause the audience to feel sorry for him, but at this stage in the play they have grown to detest his pompous, self-opinionated manner. As the scene goes on, Malvolio gains more and more confidence, there is no doubt in his mind that Olivia wants him. This thinking is fuelled when Olivia, concerned that he is not well (due to his behaviour), says 'Wilt thou go to bed, Malvolio?' He thinks this as a sexual invitation, which again, would amuse the audience. For a brief moment he reverts back to his old way of thinking and exclaims 'to bed?' ...read more.

He recites the quotes with growing aplomb. As he says them his eyes are closed and his arms are gesturing upwards, trying to show Olivia what the letter meant for him. Olivia's bemusement turns to bewilderment, which in turn a lead to a hint of being frightened of what he is going to do next. She responds in a startled manner to his quotes, saying 'ha?', 'what say'st thou?' and 'heaven restore thee!'. As if some demonic force that is causing him to act in this way possesses him. When a servant enters to speak with Olivia, she takes the opportunity to leave, to get away from the mad Malvolio. The audience will remember this scene long after the play. They find Malvolio's arrogance, pomposity and vanity amusing. They like to see him made fun of, as Maria undoubtedly does during the scene, exclaiming in shock at Malvolio's misunderstanding of Olivia telling him to go to bed. ...read more.