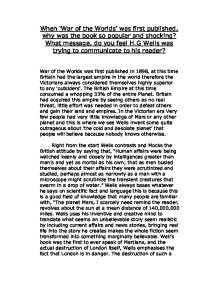 When 'War of the Worlds' was first published, why was the book so popular and shocking? What message, do you feel H.G Wells was trying to communicate to his reader?

When 'War of the Worlds' was first published, why was the book so popular and shocking? What message, do you feel H.G Wells was trying to communicate to his reader? War of the Worlds was first published in 1898, at this time Britain had the largest empire in the world therefore the Victorians always considered themselves highly superior to any 'outsiders'. The British Empire at this time consumed a whopping 33% of the entire Planet. Britain had acquired this empire by seeing others as no real threat, little effort was needed in order to defeat others and gain their land and empires. In the Victorian era Very few people had very little knowledge of Mars or any other planet and this is where we see Wells invent some quite outrageous about 'the cold and desolate planet' that people will believe because nobody knows otherwise. Right from the start Wells contrasts and Mocks the British attitude by saying that, "Human affairs were being watched keenly and closely by intelligences greater than man's and yet as mortal as his own; that as ...read more.

The Invaders are introduced into the novel with a broadminded view of them and instantly Wells discriminates the human race again, "They view our world with envious eyes", this is signifying that we, the humans are seen as prey to the envious eyes of the Martian invaders. Wells also describes humans as "beasts that perish", here he is saying that we are almighty until we reach a point where we can be beaten and we will then perish and put up no fight to attempt to keep our authority when we know we can be beaten. Wells makes the physical appearance of the Martians seem very terrifying and gruesome by using the stereotypical alien figure of a slimy green, one eyed creature with several tentacles. The aliens treat the humans as no threat and quite simply destroy them effortlessly; here Wells is again signifying that humans can be defeated by creatures greater than man, throughout the story we see Wells constantly mock the human attitude to outsiders and how the British treat the unknown. ...read more.

Wells also uses excellent horror techniques like adding colour of the sky and other scenery to signify evil and destruction by using reds to signify evil and whenever there is a battle he always uses a dark background to express the end of the British Empire and humanity, generally signifying the end. Throughout the story Wells seems to be fluent in one message of how it is not fair how the British Empire treats everything and everyone, with the big headed superior attitude. Wells has also notified Britain of how unsafe it is from invasion, attack and even complete destruction, at this time invasion from the Germans would be a high priority of national security. This story also carries a strong view on science and religion battling to have the answers to humanity and the earth, Wells also signals the pros and cons of technology and how it can or can't help with military needs. War of the Worlds also carries a strong message of bringing nations together in peace and what is really important in life. ...read more.