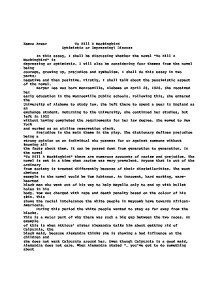 Whether the novel &quot;To Kill A Mockingbird&quot; is depressing or optimistic

Hamza Anwar To Kill A Mockingbird Optimistic or Depressing? Discuss In this essay, I shall be discussing whether the novel "To Kill A Mockingbird" is depressing or optimistic. I will also be considering four themes from the novel being courage, growing up, prejudice and symbolism. I shall do this essay in two parts; negative and then positive. Firstly, I shall talk about the pessimistic aspect of the novel. Harper Lee was born Monroeville, Alabama on April 28, 1926. She received her early education in the Monroeville public schools. Following this, she entered the University of Alabama to study law. She left there to spend a year in England as an exchange student. Returning to the university, she continued her studies, but left in 1950 without having completed the requirements for her law degree. She moved to New York and worked as an airline reservation clerk. Prejudice is the main theme in the play. The dictionary defines prejudice being a strong opinion on an individual who possess for or against someone without knowing all the facts about them. It can be passed down from generation to generation. In the novel "To Kill A Mockingbird" there are numerous accounts of racism and prejudice. The novel is set in a time when racism was very prevalent. Anyone that is out of the ordinary from society is treated differently because of their dissimilarities. ...read more.

Firstly, by placing the blanket over Jem to protect him and at the end of the play, when Boo killed Ewell to rescue the children. Now, I shall look at the positive aspect of the novel. I will be looking at the theme- growing up. "To Kill A Mockingbird" deals with many basic lessons in human nature. The book "To Kill A Mockingbird" exposes many issues that affect most people throughout their lives. Scout, the main character was one of the most affected by these lessons. During the book she was exposed to xperiences. In the three years that the book took place, she may have learned the most important things she will learn over her entire life. One person that affected Scouts life was Arthur (Boo) Radley. He brought curiosity, fear and then finally relief to her heart. There were rumours that while he cut out the newspaper for his scrap book he "drove the scissors into his parent's leg." He had tried to kill them. Even though this may have been just a rumour the kids were terrified of the Radleys. They described him often as a monster "six-and-a- half feet tall" with "bloodstained" hands. He was said to eat "raw squirrels and any cats he could catch". Finally at the end of the book he proves he is a good person by saving Scout and Jem's lives. ...read more.

He continues blaming his actions on an innocent "Negro", who he then stands by and watches die without a worry in the world. He tries to look courageous by confronting Atticus who he knows is never going to fight back. He also makes threats towards and in the end attacks the Finch children. In reality, Robert is a weak man who is prepared to go with the majority rather than stop and think for himself. His daughter Mayella is put on the stand and does not have the courage to tell the truth. She reels off a story that has been concocted by Robert to cover himself. If she had have told the truth, she risked social isolation but I believe she was more afraid of her father and what she faced if she disobeyed him. Another text similar to "To Kill A Mockingbird" is "Roll Of Thunder" by Mildred Taylor. The only difference between Lee's novel and Taylors is that "Roll Of Thunder" mainly talks about prejudice whereas "To Kill A Mockingbird" about prejudice, symbolism, courage and growing up. I believe that the novel "To Kill A Mockingbird" is optimistic. This being because it mainly teaches us how people are equal and the prejudice in the 1930's. "To Kill a Mockingbird" is a book that is full of morals. It educates the people of today to be courageous towards life, to perish racism, to always stand in other people's shoes and to finally learn from experiences in life. ...read more.