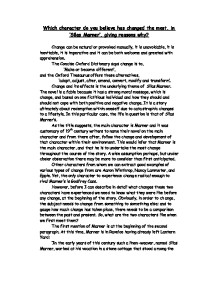 Which character do you believe has changed the most, in 'Silas Marner', giving reasons why?

Which character do you believe has changed the most, in 'Silas Marner', giving reasons why? Change can be natural or provoked manually, it is unavoidable, it is inevitable, it is imperative and it can be both welcome and greeted with apprehension. The Concise Oxford Dictionary says change is to, 'Make or become different', and the Oxford Thesaurus offers these alternatives, 'adapt, adjust, alter, amend, convert, modify and transform'. Change and its effects is the underlying theme of Silas Marner. The novel is a fable because it has a strong moral message, which is change, and based on one fictitious individual and how they should and should not cope with both positive and negative change. It is a story ultimately about redemption within oneself due to catastrophic changes to a lifestyle. In this particular case, the life in question is that of Silas Marner's. As the title suggests, the main character is Marner and it was customary of 19th century writers to name their novel on the main character and from there after, follow the change and development of that character within their environment. This would infer that Marner is the main character, and that he is to undertake the most change throughout the course of the story. A wise assumption perhaps, but under closer observation there may be more to consider than first anticipated. Other characters from whom we can extract good examples of various types of change from are Aaron Winthrop, Nancy Lammeter, and Eppie. ...read more.

Sarah did not object to William's occasional presence in their Sunday interviews.' The relationship between Sarah and Dane causes Marner's engagement to fall apart and this obviously has a major psychiatric effect on him. Yet I do not believe this is the reason Marner was in emotional exile for so long. Most of the relationships in the story are not romantic relationships; only this and one other out of many are fuelled by romance. Instead, most of the relationships are about fraternal or paternal love - a completely different dimension of the word 'love'. The fraternal love that exists between Marner and Dane is the important relationship here, not that involving Sarah Oates. Marner and Dane were so close they compared to the biblical friends, David and Jonathan: 'he had long lived in such close friendship that it was the custom of their Lantern Yard brethren to call them David and Jonathan'. Going back to one of the above quotes, I added brackets round one section because it is not significant until now. Marner was obviously ignorant of Sarah and Dane's relationship because he was quite happy with Dane being there. He wanted Dane to be there himself, maybe even more than Sarah did. It was the breakdown of this relationship with Dane, his closest sole mate known, which was the reason for the primary change in Marner. The change that included his moving home, the cause of his insanity that made him lose all touch with society, all confidence in himself, and all trust in other people. ...read more.

But sixteen years later, being married to Nancy and comfortably accepted as the most important man in Raveloe, he feels the time right to make a claim for Eppie. Over the years, though never emotionally deserting Eppie, he was never prepared to change and accept responsibility of her, now he is. The climax of the fable is the confrontation between the two characters over Eppie. One has loved and lived with her for sixteen years, the other has hid in the shadows like a coward. Confronting Marner, Cass makes the justified claim that Eppie is his child and that she belongs to him. Marner graciously accepts this fact but raises the question about why Cass had not come forward sixteen years ago rather than now. There is no answer, Cass just simply wasn't ready for the change then, if he was he may have owned Eppie all that time, but instead it was Marner who stepped forward and Eppie was his. In short, both Marner and Cass change a lot throughout the story. They both change numerous times in various examples, but Marner made the significant change first. Cass changed, but changed later than Marner, he waited for things to dictate when he should make these changes: he only married Nancy once Molly had died and his claim for Eppie was simply too late. Therefore, Marner deserves the acknowledgement of being the character that has undertaken the most change, he is the main character, but he has nonetheless changed on his own accord. ...read more.