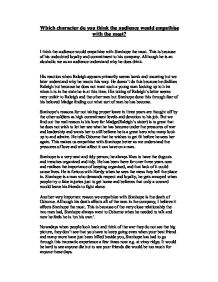 Which character do you think the audience would empathise with the most?

Which character do you think the audience would empathise with the most? I think the audience would empathise with Stanhope the most. This is because of his undoubted loyalty and commitment to his company. Although he is an alcoholic we as an audience understand why he does drink. His reaction when Raleigh appears primarily seems harsh and uncaring but we later understand why he reacts this way. He doesn't do this because he dislikes Raleigh but because he does not want such a young man looking up to him when h is in the state he is at this time. His taking of Raleigh's letter seems very unfair to Raleigh and the other men but Stanhope done this through fear of his beloved Madge finding out what sort of man he has become. ...read more.

He tells Osborne that he wishes to get fit before he sees her again. This makes us empathise with Stanhope better as we understand the pressures of love and what affect it can have on a man. Stanhope is a very neat and tidy person; he always likes to have the dugouts and trenches organized and tidy. He has been there for over three years now and realises the importance of keeping organised, and that lack of it could cause lives. He is furious with Hardy when he sees the mess they left the place in. Stanhope is a man who demands respect and loyalty, he gets annoyed when people try o fake injuries just to get home and believes that only a coward would leave his friends to fight alone. ...read more.

Nowadays when people look back and think of the war they do not see the big picture, they don't see that you have to keep going even when your best friend and many more have just been killed beside you, Stanhope has had to go through this traumatic experience a few times now e.g. at vimy ridge. It would be hard to see anyone die but to see your friends die would be too much for anyone these days. The way in which Stanhope cared for Raleigh at the end while he is dieing is truly heroic, passing of any thing else he has to do just for a few more minutes with this young man. This shows the true side to Stanhope. These reasons are why I feel the audience would empathise with Stanhope he most as he is brave, loyal, committed, fair and loving person. ...read more.