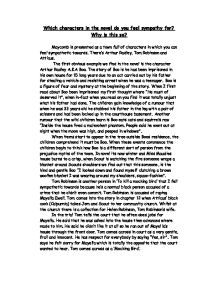 Which characters in the novel do you feel sympathy for? Why is this so?

Which characters in the novel do you feel sympathy for? Why is this so? Maycomb is presented as a town full of characters in which you can feel sympathetic towards. There's Arthur Radley, Tom Robinson and Atticus. The first obvious example we find in the novel is the character Arthur Radley A.K.A Boo. The story of Boo is he has been imprisoned in his own house for 15 long years due to an act carried out by his father for stealing a vehicle and resisting arrest when he was a teenager. Boo is a figure of fear and mystery at the beginning of the story. When I first read about Boo been imprisoned my first thought where "He must of deserved it", when in-fact when you read on you find it was totally unjust what his father had done. ...read more.

Tom Robinson is another person in 'To kill a mocking bird' that I fell sympathetic towards because he's a normal black person accused of a crime that he didn't even commit. Tom Robinson is accused of raping Mayella Ewell. Tom comes into the story in chapter 12 when Atticus' black cook (Calpurnia) takes Jem and Scout to her community church. Whilst at the church there is a collection for Helen Robinson, Tom Robinson's wife. In the trial Tom tells the court that he often does jobs for Mayella. He said that he was asked into the house then advances where made to him. He said he didn't like it at all so he ran out of Mayella's house through the front door. Tom comes across in court as a very gentle, frail and innocent. ...read more.

In chapter 11 Atticus tries to explain to Jem and Scout that if he didn't take the Tom Robinson case he couldn't live with him self, "before I can live with other folks I've got to live with myself. The one thing that doesn't abide by majority rule is a person's conscience". The person that I most feel sympathetic towards in 'To kill a Mocking bird' has got to be Tom Robinson. It basically comes down to him being a fair, well working Black man who's accused of something that he hasn't done. The story is typical of South America during the 1930's, when white people treated the black people like scum. I felt sad towards the end of the novel where Tom is shot from trying to escape prison after he had being found guilty of rape leaving a wife and 2 children behind. ...read more.