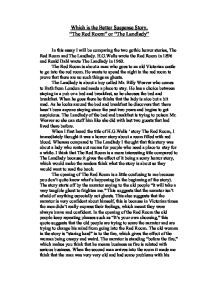 Which is the Better Suspense Story, &quot;The Red Room&quot; or &quot;The Landlady&quot;

Which is the Better Suspense Story, "The Red Room" or "The Landlady" In this essay I will be comparing the two gothic horror stories, The Red Room and The Landlady. H.G.Wells wrote the Red Room in 1896 and Roald Dahl wrote The Landlady in 1960. The Red Room is about a man who goes to an old Victorian castle to go into the red room. He wants to spend the night in the red room to prove that there are no such things as ghosts. The Landlady is about a boy called Mr. Billy Weaver who comes to Bath from London and needs a place to stay. He has a choice between staying in a pub or a bed and breakfast, so he chooses the bed and breakfast. When he goes there he thinks that the lady is nice but a bit mad. As he looks around the bed and breakfast he discovers that there hasn't been anyone staying since the past two years and begins to get suspicious. The Landlady of the bed and breakfast is trying to poison Mr. Weaver so she can stuff him like she did with last two guests that had lived there before. When I first heard the title of H.G.Wells ' story The Red Room, I immediately thought it was a horror story about a room filled with red blood. Whereas compared to The Landlady I thought that this story was about a lady who rents out rooms for people who need a place to stay for a while. ...read more.

As the narrator carries on walking towards the Red Room his candle goes out, which makes shadows wherever he looks. The narrator seeing shadows everywhere causes the suspense in the story. This is because they give the effect of large frightening images, which scare the narrator. When the narrator is in the Red Room he lights up seventeen candles and puts them around the room. But after a little while two of the candles had been put out. "Did I do that myself in a flash of absent mindedness?" This quote suggests that the narrator is saying that he puts out the candles and doesn't want to think that may be a ghost put the candles out, because he doesn't believe in them. In the Red Room there isn't really a ghost, but the narrator is still scared. The reason for the narrator being scared in the Red Room is because of the fear he has for going into the room. In the Red Room the narrator is afraid of something that doesn't exist, which is why he is found unconscious the next day by the old people. The reason for the narrator being unconscious was because he was so afraid of seeing a ghost that he knocked himself out. But when he does wake up, he says, "I seem to remember you and yet I can't remember who you are." This is because he lost his memory as he fell down stairs. In the Landlady when Billy decides to go to the bed and breakfast and knocks on the door, the Landlady opens it straight away. ...read more.

The reason for the tea smelling like bitter almonds is because she has put poison in it to poison Billy. The last line of this story is "no, my dear, only you," which is a cliffhanger ending. This quote means that reader will still carry on thinking about the story in their mind as to what happens next. The reason for the landlady doing what she does is because she is a lonely old woman who needs someone to stay with her until she dies. I think the better story out of the two is The Landlady because The Red Room has less suspense. This is because the pace of the Red Room is very slow whereas in the Landlady it gets straight to the point and the reader discovers new things about the characters. Another reason for the Landlady being a better story is because the characters are more interesting with unravelling secrets. An example of this is when you first told about the Landlady you assume she's a nice old lady. A quote that suggests this is "she looked exactly like the mother of one's best school-friend welcoming one into the house to stay for the Christmas holidays." However as the reader continues to read the story, the reader discovers that she's either a little mad or she's lonely. A quote which suggests this is "I stuff all my little pets myself when they pass away." Also knowing the main characters name Billy Weaver makes the reader feel closer to him and feel for him. The Landlady is a story that leaves the reader to fill the colour into the picture, i.e. continue the story in the mind. By, Jasneet Kaur 10x2 ...read more.