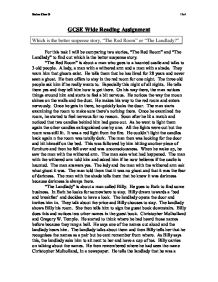 Which is the better suspense story, &quot;The Red Room&quot; or &quot;The Landlady?&quot;

GCSE Wide Reading Assignment Which is the better suspense story, "The Red Room" or "The Landlady?" For this task I will be comparing two stories, "The Red Room" and "The Landlady" to find out which is the better suspense story. "The Red Room" is about a man who goes to a haunted castle and talks to 3 old people. A lady, a man with a withered arm and a man with a shade. They warn him that ghosts exist. He tells them that he has lived for 28 years and never seen a ghost. He then offers to stay in the red room for one night. The three old people ask him if he really wants to. Especially this night of all nights. He tells them yes and they tell him how to get there. On his way there, the man notices things around him and starts to feel a bit nervous. He notices the way the moon shines on the walls and the dust. He makes his way to the red room and enters nervously. Once he gets in there, he quickly locks the door. ...read more.

It also builds up the suspense in to what the old man is going to do or say or why he is there. Although the second old man takes a while to talk, this doesn't ruin the suspense and has a good effect. The opening of "The Landlady" is mainly describing the setting. One of the ways it does this is by saying, "The air was deadly." This is a slower type of suspense. It sets the atmosphere before the actual story starts. This is a less direct way of creating suspense but works just as well. Overall I think that the two openings are very different. Although "The Red Room" is a bit slow, it's direct and attention grabbing. Moreover "The Landlady" is equally as attention grabbing but doesn't give the story away. It's a subtler opening to the story. The opening for "The Red Room" is a suited for action suspense and "The Landlady" has an opening that is better for mystery suspense. Both of these openings are very good in creating suspense but I find that "The Landlady" is more common so that takes away some suspense. I find the opening of "The Red Room" a slightly more to my liking. ...read more.

This is an ending which makes the reader think what's going to happen to Billy or what the landlady is going to do. I much prefer this ending rather than the ending of "The Red Room." This is because it can play with the reader's imagination. The story can end how the reader wants it to end. It doesn't justify anything that has happened in the story and leaves the story as suspense. Both of these stories are very similar and very different but the one I prefer is "The Landlady". This is mainly because of its characters and ending. The character of the landlady is quite unique. First she seems very pleasant but as the story goes on the readers can make up their own mind on the landlady. As the story grows so do the characters. The reader feels more sympathetic for Billy and gets more suspicious about the landlady. I feel that this is a very good formula for a suspense story. Also in the ending of "The Landlady" it isn't a complete ending. It leaves the reader wanting to read more even though the story has finished. It's like a cliff hanger ending and I feel that it works well with this story. To sum up, the better suspense story is "The Landlady". Shaban Khan :) 11x4 ...read more.