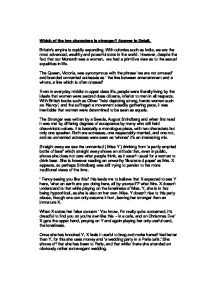 Which of the two characters is stronger? Answer in Detail.

Which of the two characters is stronger? Answer in Detail. Britain's empire is rapidly expanding. With colonies such as India, we are the most advanced, wealthy and powerful state in the world. However, despite the fact that our Monarch was a woman, we had a primitive view as to the sexual equalities in life. The Queen, Victoria, was synonymous with the phrase 'we are not amused' and branded unmarried actresses as ' the line between entertainment and a whore, a line which is often crossed' Even in everyday middle to upper class life, people were literally living by the ideals that women were second class citizens, inferior to men in all respects. With British books such as Oliver Twist depicting strong, heroic women such as 'Nancy', and the suffragette movement steadily gathering pace, it was inevitable that women were determined to be seen as equals. The Stronger was written by a Swede, August Strindberg and when first read it was met by differing degrees of acceptance by many who still held chauvinistic values. It is basically a monologue piece, with two characters but only one speaker. Both are actresses, one respectably married, and one not, and as unmarried actresses were seen as 'whores' it's an interesting mix. Straight away we see the unmarried ( Miss Y ) drinking from 'a partly emptied bottle of beer' which straight away shows an attitude that, even in public, shows she does not care what people think, as it wasn't usual for a woman to drink beer. ...read more.

She then mocks Y's life choices, ' Well dear, home is best, then theatre, then children but you wouldn't realise that.' Despite her ongoing unpicking of Y's life, I can still sense X's underlying weakness and insecurity, the insecure bully, bullies. The tide begins to turn when Miss Y throws a 'contemptuous' look. Mrs. X sees this and pulls out her big guns for attack. She brings forth the Christmas presents for her family. She shows off her wealth, which in those days really did mean happiness, to show the obviously poor Y. Perhaps this means that Mrs. X is well off, or just has more people to buy for. The next lines in the script show the only point in my view, where X is truly dominant over Y. She points the pop-gun at her and shoots it, perhaps even living out some kind of sick fantasy by ridding herself of 'Y.' She then tries to be self - deprecating with her humour 'If you tried to shoot kill me - that wouldn't be at all surprising!' Sometimes, this kind of humour can show strength of character, being able to make fun of your idiosyncrasies however, in this case, shows an insecurity and weakness. Y is now the Stronger. From this point on, Y is in complete control. When X refers to her husband as her ' Lord and Master,' she fills the typical Victorian woman role. ...read more.

That's why we go to Lake Malarn in the summer - because you don't like salt water. Your father's name is Eskil - that's why our boy had to be called Eskil. And that's why I have to wear your colours, read your pet authors, eat your favourite food and drink your precious drinks - chocolate, for example! You have forced everything on me - even your tastes in making love!' Bob has turned Mrs. X into the love he lost, for whatever reason... Y. When she leaves, X goes out very strongly, leaving the two possibly as strong as each other, she leaves with a brilliant line, one that will resound in Y's ears and leave her weakened. 'Thank you Amelia, for you've taught me. And thank you for teaching my husband how to love. Now I'm going home to love him.' X has realised that though she has to live by the life of Y, she has maybe benefited from it, benefited to the extent of having Bob. Throughout this play, Y is in overall control and generally the stronger. Mrs. X is petty and childish, though she throws insults and preys on the loneliness of Y. Y is stronger, until the final two lines. It is said that the strongest of people realise they are weak, and X does this, and in the end, uses Y to her advantage. During this play she comes of age, and becomes, the stronger. ?? ?? ?? ?? ...read more.