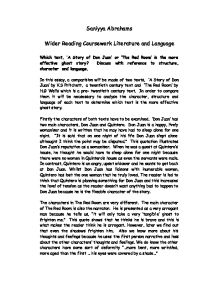 Which text, 'A Story of Don Juan' or 'The Red Room' is the more effective ghost story? Discuss with reference to structure, character and language.

Saniyya Abrahams Wider Reading Coursework Literature and Language Which text, 'A Story of Don Juan' or 'The Red Room' is the more effective ghost story? Discuss with reference to structure, character and language. In this essay, a comparision will be made of two texts, 'A Story of Don Juan' by V.S Pritchett, a twentieth century text and 'The Red Room' by H.G Wells which is a pre- twentieth century text. In order to compare them it will be necsessary to analyse the character, structure and language of each text to determine which text is the more effective ghost story. Firstly the characters of both texts have to be examined. 'Don Juan' has two main characters, Don Juan and Quintero. Don Juan is a happy, lively womaniser and it is written that he may have had to sleep alone for one night. "It is said that on one night of his life Don Juan slept alone althought I think the point may be disputed." This quotation illustrates Don Juan's reputation as a womaniser. When he was a guest at Quintero's house, he thought he would have to sleep alone for one night because there were no women in Quintero's house as even the servants were male. ...read more.

The tension in the Resolution drops just a little even though it is the end of the story. "Those hands, those lips, and those limbs...were burning him. They were of ice no more. They were of fire" This quote shows that the tension is high considering that the reader only finds out what happens to Don Juan at the very end of the story. Therefore, this is not the usual structure for a ghost story as the reader would be hopeful of the Resolution being a low-tension moment. On the other hand, The Red Room has a more typical structure for a ghost story. The tension is high in the Exposition, Complication, and Climax, and then in the final part of the text, the Resolution, ends with a low-tension moment. This is what the reader would expect to find in a good ghost story. "The worst of all things that haunt poor mortal in man; said I and that is in all its nakedness- Fear!" This quote tells the reader that The Red Room is not haunted at all. The writer leads the audience to the conclusion that fear itself is the most frightening aspect of The Red Room. ...read more.

This quotation illustrates how the narrator personifies the shadows. Also the Red Room contains many dated words like "sconce". The effects of using dated words is that the reader wants to find out what the words mean and it gives the text more excitement. The dated words also make the story more mysterious. The Red Room is the more effective ghost story in the sense of the language in the text as it builds more tension considering the personification, connotations of colour and the use of dated words. Summing it all up, after analysing the character, structure and language of both texts, it is fair to say that The Red Room is more typical of a ghost story because it has the characters which the reader expects to find in a ghost story, the structure used is also typical of a ghost story with the tension being low in the Resolution. However, The Red Room is quite disappointing as we find out that there is nothing in the red room but fear itself. In other words, there is no gohost. It also contains the language that a ghost story would need. Don Juan is the more interesting and stimulating of the two stories as Don Juan has a ghost and it maintains the readers' interest until the very last sentence. ...read more.