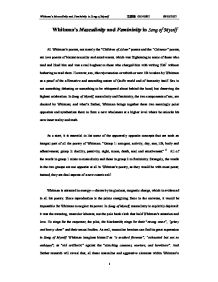 Whitman's Masculinity and Femininity in Song of Myself.

Whitman's Masculinity and Femininity in Song of Myself All Whitman's poems, not merely the "Children of Adam" poems and the "Calamus" poems, are love poems of blatant sexuality and amativeness, which was frightening to some of those who read and liked him and was a real bugbear to those who charged him with writing filthi without bothering to read them. However, sex, this rejuvenation or rebirth or new life is taken by Whitman as a proof of the affirmative and ascending nature of God's world and of humanity itself. Sex is not something debasing or something to be whispered about behind the hand, but deserving the highest celebration. In Song of Myself, masculinity and femininity, the two components of sex, are chanted by Whitman; and what's further, Whitman brings together these two seemingly polar opposites and synthesizes them to form a new wholeness at a higher level where he unlocks his own inner reality and truth. As a start, it is essential to list some of the apparently opposite concepts that are such an integral part of all the poetry of Whitman. "Group 1: arrogant, activity, day, sun, life, body and adhesiveness; group 2: docility, passivity, night, moon, death, soul and amativeness." ...read more.

Because "He is an 'absorber', who receives and accepts all into himself. He is a Cosmic Eye who searches out and seizes all, a Cosmic Sponge who absorbs and contains all."v And after the process of absorption, the poet becomes a translator, "I wish I could translate the hints about the dead young men and women." What occurs in Whitman's translation is that "he accepts the peculiar and concrete as symbolic or representative----'a gigantic beauty of a stallion'----and then quickly fuses the particular into a cosmic view where it is elevated and submerged in deeper meanings far beyond its own limitations."vi While the masculine elements Whitman extols, explores and glorifies in Song of Myself is in a variety of its implications----firm muscularity, heroism, and the democratic (Christ like) concept of brotherly love, femininity in this poem is of a very special kind. Women of the ultra feminine, dainty and charming type are totally absent in Whitman's verse. Instead, women in Whitman's poetry are glorified for their masculine strength rather than their feminine delicacy; they are mostly down-trodden and among the laboring classes: females he sings for in Song of Myself are "the prostitute" draggling "her shawl, her bonnet bobs on her tipsy and pimpled neck." ...read more.

"Day-man-life is not really separated from night-woman-death."x They all merge to become a whole; all are of equal value; and all lead to new birth and a higher level of a Cosmic self."xi As Whitman himself affirms, "Out of the dimness opposite equals advance, always substance and increase, always sex." Or again, the ultimate affirmation: "All goes onward and outward, nothing collapses."xii i See Sherry Ceniza "Being a woman...I Wish to Give My View": Some Nineteenth Century Women's Responses to the 1860 Leaves of Grass ii Kaplan, Justin: "Walt Whitman---a life" New York: Simon and Schuster, 1980. (P 429) Critical Biography of Whitman iii Horber "Writing the Male Body" Literature and Psychology 33, No S.3 and 4 (1987) P 16-26 iv See ? v See ? vi William M. White "Walt Whitman" Texas Studies in Literature and Language 25 No.1 (Spring 1983) P 139-143 vii See I viii Brown Clarence A Walt "Whitman and the New poetry" American Literature 1982 ix See ? x See ? xi Wiegman, Robyn "The Dynamics of Whitman's Poetry " in the Sewanee Review, Vol. LXXX. No.2 Spring, 1972, PP 247-260 xii See V Whitman's Masculinity and Femininity in Song of Myself ??? 01041083 08/05/2007 1 ...read more.