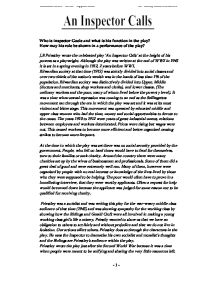 Who is inspector Goole and what is his function in the play? How may his role be shown in a performance of the play?

_______________________________________________ Who is inspector Goole and what is his function in the play? How may his role be shown in a performance of the play? J.B Priestley wrote the celebrated play 'An Inspector Calls' at the height of his powers as a playwright. Although the play was written at the end of WW2 in 1945 it is set in a spring evening in 1912, 2 years before WW1. Edwardian society at that time (1912) was strictly divided into social classes and over two-thirds of the nation's wealth was in the hands of less than 1% of the population. Edwardian society was distinctively divided into Upper, Middle (doctors and merchants, shop workers and clerks), and lower classes. (The ordinary workers and the poor, many of whom lived below the poverty level). It was a time when sexual repression was coming to an end as the Suffragettes movement ran through the era in which the play was set and it was at its most violent and bitter stage. This movement was operated by educated middle and upper class women who had the time, money and social opportunities to devote to the cause. The years 1910 to 1912 were years of great industrial unrest, relations between employers and workers deteriorated. Prices were rising but wages were not. This caused workers to become more efficient and better organised causing strikes to become more frequent. At the time in which the play was set there was no social security provided by the government. People, who fell on hard times would have to fend for themselves, turn to their families or seek charity. Around the country there were many charities set up by the wives of businessmen and professionals. Some of them did a great deal of good and were extremely well run. Many of them, however were organised by people with no real interest or knowledge of the lives lived by those who they were supposed to be helping. ...read more.

The Inspector doesn't seem to be of this world, let alone of the Brumley police department. This is a strong possibility because the Inspector, not once touched anything solid. When asked for a drink (pg 11) he refused. You can tell that the Inspector is not a member of the police force because Mr Birling says he knows most of the officers in Brumley and when asked ' do you get on with the chief constable' the Inspector replies ' I don't see much of him.' Which reinforces the prediction that he is not a real Inspector but a hoax? The Inspector is omniscience- he knows everything about the family's involvement with the girl, before the Birlings reveal their secrets. He constantly repeats, "I haven't much time" which could suggest that is some kind of spirit whose time on earth is running out. When the Inspector first enters the play Priestley describes the Inspector in terms of 'massiveness, solidity and purposefulness' symbolising the fact that he is all over the place, he sees, hears and smells anything anywhere. It symbolises the fact that he is an unstoppable force within the play. Priestley's description of the Inspector when he enters the play is describing him in terms of a Super-being and as a reference to god. The Inspector's name Goole, also has tremendous significance, it is a homonym. Ghoul, another form of the word, has exactly the same sound but its meaning carries a great effect on the play as a Ghoul is a demon that eats dead corpses which could suggest that he ate Eva Smith and could account for the fact that he (the Inspector) knows everything about Eva without ever meeting her. A Ghoul is "an evil spirit" to Birling and his upper class peers as he (Inspector) comes to confront their conscience. The Inspector affects Sheila and Eric, the younger generation, more then any other characters because that's what priestly wanted, he wanted to show us that the young generation should/are learning from their own and the mistakes their parents made. ...read more.

When you see a group of people on the streets standing beside a table inviting you to take a read of their literature, the way some socialists do, or preaching their religious philosophical believes you hope to walk past them unnoticed. Priestly chose the best way to present his concern and believe. He used his philosophical and abstract ideas and a very powerful device at that time, which was the theatre, to convey and outline his message of proactive unity and how societies should be formed. He resourcefully used his experience and his talent as a playwright to make sure his message was heard and understood, by the right audience. One wonders to themselves, was Priestley introducing a new system of running a government, which was to find its basis from communism. He believed that a person's wealth should be taken away from them and be shared (in communism it is rationed) so that every one is equal in wealth. The moral of "An Inspector calls" is that no matter what class we are, we are all human beings and therefore we are all equal in our claim for Human rights. Priestley's biggest message was collective responsibility and that we must work together. Priestley didn't want all the suffering he and countless others went through in the war to be worthless. He wanted the social system to change and its people to be more responsible for their actions. Priestley wrote this play to make his audience, question their own character and beliefs. He wanted to show us that the claim for superiority could lead to unseen and unheard disasters. Priestley wanted to get this moral across, he wanted us to learn from the mistakes of the Birlings and that we should not shift the blame on to others. I think Priestley did get his message across but unfortunately we will always have to bear witness the exceptional people such as the Birlings who never change. Mohammed Shuaib - 11NGO - Sapphire House < 20th Century Drama Coursework > - 1 - ...read more.