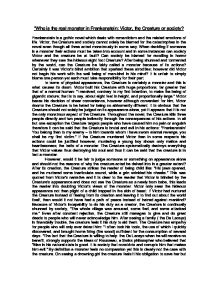 &quot;Who is the real monster in Frankenstein: Victor, the Creature or Society?

"Who is the real monster in Frankenstein: Victor, the Creature or society? Frankenstein is a gothic novel which deals with romanticism and the related emotions of life. Victor, the Creature and society cannot solely be blamed for the catastrophes in the novel even though all three acted monstrously in some way. When deciding if someone is a monster their actions must be taken into account and in some instances can society Victor and the creature be at fault? Can society be blamed for recoiling in horror whenever they saw the hideous eight foot Creature? After being shunned and tormented by the world, can the Creature be fairly called a monster because of its actions? Certainly it was Victor's blind ambition that sparked these atrocities; however did Victor not begin his work with the well being of man-kind in his mind? It is unfair to simply blame one person yet each must take responsibility for their part. In terms of physical appearance, the Creature is certainly a monster and this is what causes its doom. Victor built his Creature with huge proportions, far greater that that of a normal human: "I resolved, contrary to my first intention, to make the being of gigantic stature; that is to say, about eight feet in height, and proportionally large." ...read more.

Society's inability to see past the Creature's physical appearance causes great anguish and hurt to the Creature who longs for acceptance but never receives it. This longing for companionship escalates as he watches over the De Laceys. He sees in every member of the family something he will never be given: love. "The mild exhortations of the old man, and the lively conversations of the loved Felix, were not for me. Miserable, unhappy wretch!" The Creatures want of love and friendship are human qualities therefore he should not be seen as a moral monster, yet society can never give the Creature what he desires because of his hideous appearance. This point is emphasised by the fact that in his meeting with a blind man, he is accepted as a friend but as soon as the blind man's son sets eyes on the Creature he judges him to be a villain. People fear what they do not understand, thus if society had more empathy and feared the Creature less, then the Creature would have been able to coexist peacefully with man. Society's inability to judge the Creature on anything else rather appearance alone made it a monster. ...read more.

Previously Victor did not think through the consequences of his creation however during the creation of the female Creature he did and that was what made him stop: "I shuddered to think that future ages might curse me as their pest, whose selfishness had not hesitated to buy its own peace at the price, perhaps, of the existence of the whole human race." From this quote it is clear that Victor is thinking about the consequences of creating another Creature. Victor may be thinking about the dire problems that would ensue if the Creatures bred. He knew that the Creature would take retribution against Victor and his loved ones yet still he destroyed the project. Can Victor really be condemned as a monster when he was in fact thinking selflessly? In conclusion, it is clear that both Victor and society abandonment and neglecting towards the Creature was monstrous however the blame can be substantially removed from society because its fear of the monster and its constant attacks against it were justified due to the fact that it was physically a monster. The rejection that the creature suffered does not justify the fact that the creature caused the death of five people in cold blood, clearly monstrous actions however it can be said that the actions of Victor drove the creature into becoming a monster. ...read more.