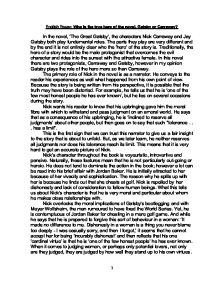 Who is the true hero of the novel, Gatsby or Carraway?

English Essay; Who is the true hero of the novel, Gatsby or Carraway? In the novel, 'The Great Gatsby', the characters Nick Carraway and Jay Gatsby both play fundamental roles. The parts they play are very different and by the end it is not entirely clear who the 'hero' of the story is. Traditionally, the hero of a story would be the male protagonist that overcomes the evil character and rides into the sunset with the attractive female. In this novel there are two protagonists, Carraway and Gatsby, however in my opinion Gatsby plays the role of the hero more so than Carraway. The primary role of Nick in the novel is as a narrator. He conveys to the reader his experiences as well what happened from his own point of view. Because the story is being written from his perspective, it is possible that the truth may have been distorted. For example, he tells us that he is 'one of the few most honest people he has ever known', but he lies on several occasions during the story. ...read more.

What this tells us about Nick's character is that he is very moral and particular about whom he makes close relationships with. Nick overlooks the moral implications of Gatsby's bootlegging and with Meyer Wolfsheim, the man rumoured to have fixed the World Series. Yet, he is contemptuous of Jordan Baker for cheating in a mere golf game. And while he says that he is prepared to forgive this sort of behaviour in a woman: 'It made no difference to me. Dishonesty in a woman is a thing you never blame too deeply - I was casually sorry, and then I forgot,' it seems that he cannot accept her for being 'incurably dishonest' and then reflects that his one 'cardinal virtue' is that he is 'one of the few honest people' he has ever known. When it comes to judging women, or perhaps only potential lovers, not only are they judged, they are judged by how well they stand up to his own virtues. This shows that Nick is very moral; however he does not apply he rules to Gatsby. In fact, the only person that Carraway actually shows true affection to in the novel is Gatsby himself. ...read more.

He confronts Tom on this issue and says, 'your wife doesn't love you...she never loved you. She loves me.' The fact that Gatsby actually succeeds in attracting Daisy back, in my opinion, makes him more 'heroic'. The methods in which he goes through in order to carry out his dream, i.e. unscrupulous ways, only focusing on his goal. Gatsby becomes a bootlegger of alcohol amongst other things to get the required money to get back Daisy. This shows his focus and disregard for rules just to get the woman he loves. To me this makes him far more romantic and heroic than Nick. I am quite certain that a part of Fitzgerald's personality is reflected by Gatsby, i.e. the part that tries to pursue wealth in order to attract the woman he loves. This is similar to what happened in Fitzgerald's life. The parents of his fianc� rejected him because he was poor. . After reviewing the evidence, I think that Gatsby plays the role of the hero, however more as a tragic hero. This is because when he finally obtains what he wants and lives for (to reclaim Daisy) he dies. His role as the true hero is reinforced by the fact that he dies trying to save the one he loves. 1 ...read more.