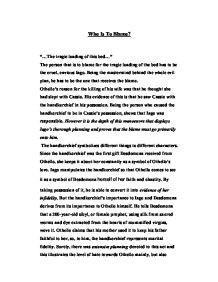 Who Is To Blame?

Who Is To Blame? "...The tragic loading of this bed..." The person that is to blame for the tragic loading of the bed has to be the cruel, envious Iago. Being the mastermind behind the whole evil plan, he has to be the one that receives the blame. Othello's reason for the killing of his wife was that he thought she had slept with Cassio. His evidence of this is that he saw Cassio with the handkerchief in his possession. Being the person who caused the handkerchief to be in Cassio's possession, shows that Iago was responsible. However it is the depth of this manoeuvre that displays Iago's thorough planning and proves that the blame must go primarily onto him. The handkerchief symbolizes different things to different characters. Since the handkerchief was the first gift Desdemona received from Othello, she keeps it about her constantly as a symbol of Othello's love. Iago manipulates the handkerchief so that Othello comes to see it as a symbol of Desdemona herself of her faith and chastity. ...read more.

This is thy work." This response by Lodovico after all the blood has been shed, illustrates the public opinion at this point in the play, that Iago is to blame for the carnage. Iago is even referred to as the Devil himself! "...That demi-devil Why he hath thus ensnared my soul and body?" This proves that Iago is the culprit in the eyes of the witnesses and should be held responsible. There is exceedingly little evidence to suggest otherwise, and why should anyone suggest otherwise? The proof has been well documented. Iago's horrendously deep plot has been uncovered and proved to be correct by none other than his own wife before he cowardly murdered her to increase the blood on his hands. "She give it to Cassio? No, alas, I found it, And I did give't my husband." The evidence is coming from Iago's own wife! Iago still, however, denies this, "Filth, thou liest!" 'Honest' Iago displays the way he treats his wife here by referring to her as 'filth' and calling her a liar. ...read more.

Many of the main characters in the play have racist attitudes. This illustrates the general attitude of the people in the Venetian state at the time. Roderigo clearly has a racist attitude in the play. He calls Othello, "Thick lips". Another of the main characters with a racist attitude would be Brabantio. He is enraged when he discovers Desdemona has been seeing Othello. He refers to Othello as foul and dirty no good black. He also openly makes racist comments to Othello. "Wheeling Stranger". "Lascivious Moor". These clearly racist attitudes seem common throughout Othello and appear to be the general attitude of most people in the book. This displays the fact that the Venetian State can certainly be blamed partly for the carnage. Desdemona married to a black man was generally not accepted by the people of the Venetian state as was Othello being so highly ranked in the army (ahead of Iago). This was due to their racist attitudes and increased Iago's hatred towards Othello. Would this happen in a non-racist state? Would this happen if Othello was white? ...read more.