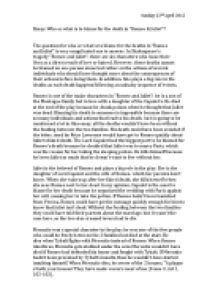 Who or what is to blame for the deaths in &quot;Romeo &amp; Juliet&quot;

﻿Sunday 22nd April 2012 Essay: Who or what is to blame for the death in ?Romeo & Juliet?? The question for who or what is to blame for the deaths in ?Romeo and Juliet? is very complicated one to answer. In Shakespeare?s tragedy ?Romeo and Juliet?, there are six characters who loose their lives as a direct result of love or hatred. However, these deaths cannot be blamed on one person alone but rather on the actions of several individuals who should have thought more about the consequences of their actions before doing them. In addition, fate plays a big role in the deaths as each death happens following an unlucky sequence of events. Romeo is one of the major characters in ?Romeo and Juliet?; he is a son of the Montague family but in love with a daughter of the Capulet?s. He died at the end of the play because he drank poison when he thought that Juliet was dead. ...read more.

In my opinion, Capulet is the most to blame for her death because he organized the wedding with Paris against her will, causing her to take the potion. If Romeo hadn?t been banished from Verona, Romeo could have got the message quickly enough for him to know that Juliet isn?t dead. Without the feuding between the two families they could have told their parents about the marriage, but it wasn?t the case here, so the two star-crossed lovers had to die. Mercutio was a special character in the play; he was one of the few people who could be freely between the 2 families but died at the start. He dies when Tybalt fights with Mercutio instead of Romeo. When Romeo interferes, Mercutio gets stabbed under the arm. Mercutio wouldn?t have died if Romeo had defended his honor and fought with Tybalt. If Mercutio hadn?t been provoked by Tybalt?s insults, then he wouldn?t have started insulting himself. ...read more.

Tybalt would have stayed alive if he hadn?t have started the fight between Mercutio and himself and simply left them alone. In my opinion I think that the hatred started from their parents and passed it on to their sons and daughters. In the play, Lady Montague, Romeo?s mother, kills herself because of grief when she is told of the death of her son, Romeo. This could have been avoided if Friar Lawrence hadn?t given Juliet the sleeping potion. If Friar John had let Romeo know quickly about Juliet?s faked death, Romeo wouldn?t have reacted so desperately. She acted very rashly when she decided to kill herself because for grief. However, if the two families had not been feuding for the last centuries, Lady Montague would have survived. As we have seen, every individual?s actions or lack of thinking the situation through before taking action leads to so many tragic deaths. As in all Shakespeare?s tragedies, the characters cannot escape their fate. Either some important information had not been delivered punctually or the characters are in the wrong place at the wrong time. Laurence Kobrock Grade 8a ...read more.