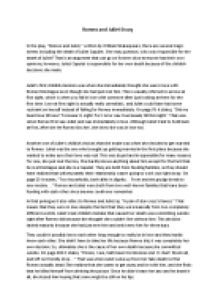 Who was responsible for the death of Juliet?

﻿Romeo and Juliet Essay In the play, ?Romeo and Juliet,? written by William Shakespeare, there are several tragic events including the death of Juliet Capulet. One may question, who was responsible for the death of Juliet? That is an argument that can go on forever since everyone has their own opinions, however, Juliet Capulet is responsible for her own death because of the childish decisions she made. Juliet?s first childish decision was when she immediately thought she was in love with Romeo Montague even though she had just met him. This is usually referred to as love at first sight, which is when you fall in love with someone after just looking at them for the first time. Love at first sight is actually really unrealistic, and Juliet could have had some restraint on herself instead of falling for Romeo immediately. ...read more.

On page 20 it states, ?Two households, both alike in dignity? From ancient grudge break to new mutiny?? Romeo and Juliet were both from two well-known families that have been feuding with each other since anyone could ever remember. In that prologue it also refers to Romeo and Juliet as, ?A pair of star-cross?d lovers.? That means that they were in love despite the fact that they were basically from two completely different worlds. Juliet?s last childish mistake that caused her death was committing suicide right after Romeo did because she thought she couldn?t live without him. This decision lacked maturity because she had just met him and only knew him for three days. They couldn?t possibly know each other long enough to really be in love and they hardly know each other. ...read more.

And she committed suicide so she could be with Romeo forever without their families feuding to get in the way. This situation regarding Juliet?s death, can relate to the song, ?Romeo and Juliet,? by the Killers. In the song it states, ?When you gonna realize, it was just that the time was wrong.? That statement relates to the situation at hand, because the only reason Juliet made the choice to commit suicide was because Romeo did first. It was only a matter of seconds after Romeo had killed himself that Juliet had woken up from her fake death. This was fate, and the timing was wrong. If Juliet awakened thirty seconds sooner, or if Romeo held of his death a few seconds, than it would have all worked out. But, unfortunately it didn?t and they both had to lose their lives, just so they could be together forever since they thought their love for each other was sempiternal. ...read more.