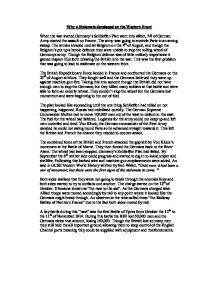 Why a Stalemate developed on the Western Front.

Why a Stalemate developed on the Western Front When the war started Germany's Schlieffen Plan went into affect, 7/8 of German Army started the assault on France. The army was going to encircle Paris in an arcing sweep. The armies invaded neutral Belgium on the 4th of August, and though the Belgium's put up a heroic defence they were unable to stop the rolling wheel of Germanys army. Though the Belgium defence was of little military importance it gained respect thus forth drawing the British into the war. This was the first problem that was going to lead to stalemate on the western front. ...read more.

Logistics for the army could not keep up and left men underfed and tired. Von Kluck, the German commander of the First Army decided he could not swing round Paris so he advanced straight towards it. This left the British and French the chance they needed to counter-attack. The combined force of the British and French attacked the gap left by Von Kluck's movement at the Battle of Marne. They then forced the Germans back to the River Aisne. The wheel had been stopped. Germany's Schlieffen Plan had failed. By September the 8th neither side could progress and started to dig in to avoid sniper and shellfire. ...read more.

During this battle the BEF lost 50,000 men and the Germans twice that amount, losing 100,000. Though the British lost so many men they still held the all important ground allowing them to keep control of the English Channel ports meaning they could be supplied with equipment and reinforcements. By November it was a deadlock. Both sides had suffered great casualties. Neither side had managed to break through. The Germans were not prepared to leave so they dug in, and the French and British were not going to give up. Millions of troops were dug into lines that stretched from the north of France to the east. The war had reached stalemate and would last for a lot longer than any sides generals had anticipated. By Nathan Flye ...read more.