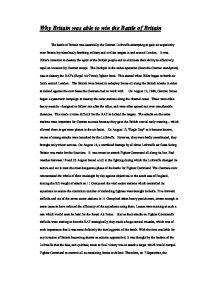 Why Britain was able to win the Battle of Britain

Why Britain was able to win the Battle of Britain The battle of Britain was essentially the German Luftwaffe attempting to gain air superiority over Britain by relentlessly bombing military and civilian targets in and around London. It was Hitler's intention to destroy the spirit of the British people and to eliminate their ability to effectively repel an invasion by German troops. The linchpin in the entire operation (from the German standpoint) was to destroy the RAF's (Royal Air Force) fighter force. This started when Hitler began to bomb air fields around London. The British were forced to redeploy forces all along the British islands in order to defend against the new bases the Germans had to work with. On August 12, 1940, German forces began a systematic campaign to destroy the radar stations along the channel coast. ...read more.

The Germans now concentrated the whole of their onslaught by day against objectives in the south east of England, turning the full weight of attack on 11 Group and the vital sector stations which controlled its squadrons to ensure the maximum number of defending fighters were brought to battle. Five forward airfields and six of the seven sector stations in 11 Group had taken heavy punishment, severe enough in some cases to have reduced the efficiency of the squadrons using them. Losses were running at such a rate which would soon be fatal for the Royal Air Force. Just as their attacks on Fighter Command's airfields were starting to hurt the RAF strategically, they made a huge tactical mistake, which was of such importance that it was most definitely the turning point of the battle. ...read more.

London as a target was further inland than previous objectives. Home squadrons were thus presented with more time to intercept incoming raiders and the endurance of the German single-seat escort fighters in the battle area was reduced. The decisive day was September 15 - when Fighter Command was able to deploy as many as seventeen squadrons to counter a series of heavy German attacks. After a long day, during which the Luftwaffe lost 60 aircraft, it became obvious to both sides that German tactics had failed. The RAF had not been destroyed and the British people were as determined as ever, and invasion was not a viable possibility. Although fighting continued, sometimes heavily, for another few weeks into October, the action on September 15 had proved that the Germans could not win the Battle of Britain. ...read more.