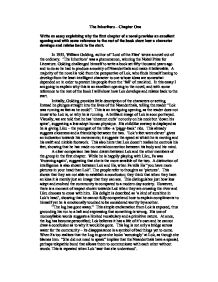 Why Chapter One of the Inheritors provides an excellent opening to the novel.

The Inheritors - Chapter One Write an essay explaining why the first chapter of a novel provides an excellent opening and with some reference to the rest of the book show how a character develops and relates back to the start. In 1955, William Golding, author of 'Lord of the Flies' wrote a novel out of the ordinary. 'The Inheritors' was a phenomenon, winning the Nobel Prize for Literature. Golding challenged himself to write a book set fifty thousand years ago and to do so he had to produce a society of Neanderthals and make it believable. A majority of the novel is told from the perspective of Lok, who finds himself having to develop from the least intelligent character to one whose ideas are somewhat depended on in order to protect his people from the 'fall' of mankind. In this essay I am going to explain why this is an excellent opening to the novel, and with some reference to the rest of the book I will show how Lok develops and relates back to the start. Initially, Golding provides little description of the characters or setting. ...read more.

However, Lok's senseless attitude remains constant as he 'babbled happily', with 'words coming out at random'. The description of Ha's attempt over the river is effective, as a climax is created by use of long sentences broken into shorter phrases with commas. This reaches an optimum as he makes it safely to the other side, and 'the sun chose this moment to reappear so that the whole world seemed to share their pleasure'. This is another fantastic use of personification, as the people think of the sun and the world being alive and having feelings too, showing their close relation to nature. It becomes apparent that the old woman is also a highly respected member of the tribe, as when Mal speaks to her, he does so 'gently', and refers to her as 'she', suggesting importance of a great significance. Until Mal's crossing, this had been a momentous occasion with everyone making it across safely. However, when he crosses he loses his footing and ends up in the water 'grinning painfully'. This is a paradox, as he is not enjoying the water but it is possible that the Neanderthals cannot distinguish between a grin and a face crumpled in discomfort. ...read more.

The people also have a great respect for a female god, who they have christened 'Oa'. This 'Oa' represents the mother of nature, and so shows respect for the female body and the beginning of life. The development of Lok relates back to the first chapter because it is the start of the novel that reveals his true character. His care for the other members of the tribe, and his will to please are revealed by his child-like nature and his attempts to bring laughter to the people, in doing such things as exaggerating his jump over the river and pretending to talk to grubs in a rock for a comic effect. His honest love and respect for nature are conveyed in the first chapter and are symbolised by such actions as 'patting the dead tree affectionately'. These pure qualities remain in him throughout the novel, so much so that he refuses to believe that things are wrong and cannot accept when they are. To him, he has just as much 'incomprehension' for his people disappearing as he has for that very first time that he noticed smoke from the island. This is why it is justifiable to say that overall, Lok represents innocence. He doesn't know evil; and this is what is portrayed in the first chapter. ...read more.