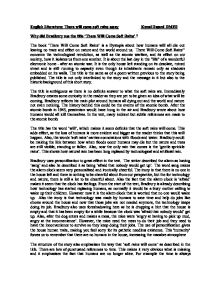 Why did Bradbury use the title There will come Soft Rains?

English Literature: There will come soft rains essay Kunal Dasani DMFD Why did Bradbury use the title 'There Will Come Soft Rains'? The book 'There Will Come Soft Rains' is a Dystopia about how humans will all die out leaving no trace and effect on nature and the world around us. There Will Come Soft Rains" concerns the technological revolution, as well as the atomic warfare, and its effect on our society, how it isolates us from one another. It is about the last day in the "life" of a wonderful electronic home - after an atomic war. It is the only house left standing on its desolate, ruined street and is still running to capacity even though its inhabitants remain only as shadows embedded on its walls. The title is the same as of a poem written previous to the story being published. The title is not only interlinked to the story and the message in it but also to the historic background of this short story. The title is ambiguous as there is no definite answer to what the soft rains are. Immediately Bradbury creates some curiosity in the reader as they are yet to be given an idea of what will be coming. ...read more.

There are lots of punctuated references to time. This makes it very obvious what is missing and it emphasises the fact that humans are no longer alive. For example the time is always mentioned and everything is well structured. At children's hour the walls 'glowed' making them seem alive but there were no children to see them. Also, the house responds to the passing of time and still exists despite the emptiness of the house. The death of the dog also resembles the way that humans died. The dog entered the house with technology cleaning up behind it. However, when the dog dies, the mice take it away and suddenly 'the dog was gone'. This is like how humans died out without there being any remembrance for them or any trace of their living. Bradbury also makes oblique references to the family that once lived there. On the wall there was a black 'silhouette in paint of a man mowing a lawn'. This silhouette stands as a remembrance to the people who used to live here but that is the only trace of them and there are no traces of them anywhere else. ...read more.

The poor dog is recognised as one of the houses former inhabitants and is let in the front door, dirtying the religiously clean hall. Bradbury describes the death of the dog in such a way that it makes it seem that the dog was punished for dirtying the religious grounds. The fire also adds a lot to the irony. This is because in the end it is nature itself that ends up killing the house. Also, the fire finalizes the coming of soft rains. 'The sun rises, it is morning and the earth is cleansed'. Nature has finally won, destroying perhaps every 'living' trace of humanity, the last human effigy. Soft rains have finally come. In conclusion the title 'There Will Come Soft Rains' is very effective upon the story as throughout the story Bradbury adds effect and exaggeration upon the destruction of humans by using techniques like personification to outline the missing of humans and also the use of the poem and the alarm clock as ironic things that still exist even though humans have died out. The story starts with the soft rains as being unknown but at the end the soft rains have finally come, destroying all resemblance and memory of humans. ...read more.