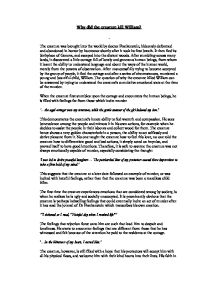 Why did the creature kill William? Frankenstein

Why did the creature kill William? The creature was brought into the world by doctor Frankenstein, hideously deformed and abandoned in horror by its creator shortly after it took its first breath. It then fled its birthplace of Geneva, and escaped into the distant woods. After stumbling across many lands, it discovered a little cottage full of lovely and generous human beings, from whom it learnt the ability to understand language and about the ways of the human world, merely from the powers of observation. After unsuccessfully trying to become accepted by the group of people, it fled the cottage and after a series of circumstances, murdered a young and beautiful child, William. The question of why the creature killed William can be answered by trying to understand the creature's cumulative emotional state at the time of the murder. When the creature first stumbles upon the cottage and encounters the human beings, he is filled with feelings far from those which incite murder '...the aged cottager won my reverence, while the gentle manner of the girl induced my love.' This demonstrates the creature's innate ability to feel warmth and compassion. He sees benevolence among the people and mirrors it in his own actions, for example when he decides to assist the people in their labours and collect wood for them. ...read more.

He begun to doubt the humans as a race, and danced with feelings of 'rage and revenge'. After realising to what extent the humans despised him, these feelings were firmly cemented in the creature and he began to feel violent and hence capabe of murder. 'For the First time the feelings of revenge and and hatred and revenge filled my bosom... I bent my mind towards injury and death.' The creature's isolation from mankind, and long days without any human contact allowed it to further torture itself with the cruelty he had indured, first at the hand of his creator, and secondly at the hands of his supposed protectors. He had tried to seek the compassion his creator had not given him in other human beings, and had been treated with equal hatred. His suffering was intense and thus his feelings of passionate bitterness and desire to seek revenge through violence grew. The creature had been treated with violence by Felix, and had read of violence in novels he acquired, and so knew of it more than just instinctively. These feelings of violence were not suddenly borne from one bad act, because he didn't kill Felix when he had the chance, but instead spared him, and only now after much thought and consideration he felt passionate enough to commit these acts. ...read more.

The creature. The above quote shows the creature's motives behind killing William. He wanted to subject his creator to similar emotions that he had been subjected to, for example, despair, pain and desperation. The creature realises that he has power over his creator, power to give him misery, just as his creator has given him misery. The only idea the creature has on how to rouse these emotions from within Frankenstein is by killing his loved ones. This is the primary reason why he kills William . The creature did not kill because of rooted evil qualities in which he was born into, but instead he killed as a reaction to the severe rejection he endured and as a result of being on the receiving end of cumulative acts of prejudiced hatred. In fact, there is more evidence to suggest, as discussed throughout the essay, that the creature tried repeatedly to make friends with the humans despite being repeatedly rejected. For example, even after he is shunned by the society of the cottage, he tries to help the little girl. In conclusion, the creature was not born a monster, but from the nature of humanity, a monster was born. The monster killed William because society had made him a monster, and the only way he felt he could gain revenge was from making Dr Frankenstein feel as lonely as him, hence, by killing his close family. ...read more.