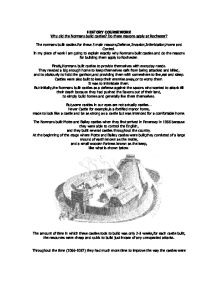 Why did the Normans build castles? Do these reasons apply at Rochester?

HISTORY COURSEWORK Why did the Normans build castles? Do these reasons apply at Rochester? The normans built castles for these 5 main reasons,Defence,Invasion,Intimidation,Home and Control. In my piece of work i am going to explain exactly why Normans built castles and do the reasons for building them apply to Rochester. Firstly,Normans built castles to provide themselves with everyday needs. They needed a big enough home to keep themselves safe from being attacked and killed, and to obviously to hold the garrison,and providing them with somewhere to live,eat and sleep. Castles were also built to keep their enemies away,or to worry them. It was to intimidate them. But initially,the Normans built castles as a defense against the saxons who wanted to attack till their death because they had pushed the Saxons out of their land, to simply build homes and generally live there themselves. But,some castles in our eyes are not actually castles... Hever Castle for example,is a fortified manor home, made to look like a castle and be as strong as a castle but was intended for a comfortable home. ...read more.

They had control of the main road to Canterbury, Watling street,and quite abit of Rochester. Watling Street is a famous Roman road which crosses the River Medway on it's way from London,Dover and then Canterbury. We believe that there was a Motte and Bailey castle before the stone because the way that the castle has been built on a hill, it is evidence since the Motte and Bailey castles were always built on a hill, They knew that they were more likely to be attacked with a weak attacking point, And so there would not be such a desperate need to build a stone castle on a steep hill due to it being alot stronger,and more time being spent developing them. Motte and Bailey castles were vulnerable because although the materials the castles were made out of were good enough to go through a battle, they were likely to be easily set on fire and the chances of the castle surviving flying rocks were low. The attackers would have alot of ways to bring the castle down,due to the castle being made out of wood. ...read more.

A Shell Keep is what is shown below. Every castle had things in common,every castle had a routeway and every castle had a strongpoint where the soldiers could go to keep safe whilst under attack.Also most castles had a moat or some type of ditch,it would make it a little harder for the enemies to approach the castle,aswell and them controlling quite abit of the surrounding land around the castle, And there was always a supply of safe water just incase of a siege. The Normans improved their Motte and Baileys because they wanted to provide a safer home for all of the soldiers, also for obvious reasons like the fact they were alot stronger than the Motte and Bailey castles. Alot more stronger materials were used and were very different to the materials which were used for the Motte and Bailey castles. The English found it nearly impossible to capture castles,also they used castles as their bases. My Conclusion is that basically the Nomans built castles to protect the king and his army from attack, also to intimidate the enemies along with helping themselves with preparation for attacks, i also believe that the reasons do apply to rochester. ...read more.