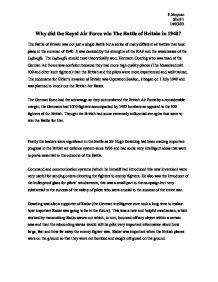 Why did the Royal Air Force win The Battle of Britain in 1940?

Why did the Royal Air Force win The Battle of Britain in 1940? The Battle of Britain was not just a single Battle but a series of many different air battles that took place in the summer of 1940. It was decided by the strengths of the RAF and the weaknesses of the Luftwaffe. The Luftwaffe should have theoretically won, Hermann Goering who was head of the German Air Force was confident because they had more high quality planes (The Messerschmitt 109 and other such fighters) than the British and the pilots were more experienced and well trained. The codename for Hitler's invasion of Britain was Operation Sealion, it began on 1 July 1940 and was planned to knock out the British Air Bases. The German force had the advantage as they outnumbered the British Air Force by a considerable margin; the Germans had 1000 fighters accompanied by 1400 bombers as opposed to the 820 fighters of the British. Thought the British had some extremely influential strengths that were to win the Battle for Her. ...read more.

Radar was important when the British planes were on the ground so that they were not bombed and caught off guard on the ground. The British fighters were more than a match for the German fighters and only the Messerschmitt 109 could rival the Spitfire, which were quick and powerful. All these technological advances contributed to the success of the RAF in this Battle. It was of course a huge advantage to be fighting on home soil. British fighters who bailed out in battles were effectively recycled because they not taken prisoner as the German pilots were. Also the German fighters could evidently not fly in British airspace for long periods of time as they ran out of fuel, in all cases they could not guarantee a stay for longer than half an hour. The RAF could clearly refuel at nearby airbases and rejoin the battle in relatively short periods of time therefore not wasting any time flying large distances to merely refuel as the Luftwaffe had to do. ...read more.

All these minor differences amounted to a large advantage for the RAF and the Battle of Britain was slowly beginning to turn in their favour. Ultimately the RAF began to shoot down more and more of the German fighters and bombers as Goering made more and more mistakes, which were became very costly. The Germans took a series of minor defeats leading up to September and on September 11th Hitler postponed Operation Sealion until the 24th September but on September 17th, following an obvious change of plan, he deferred it ad infinitum. The Battle of Britain was won and the German had lost 1,733 planes contrasting the British loss of 915, nearly half the amount, and the RAF were given enormous praise by Churchill and the British people, "Never in the field of human conflict was so much owed by so many to so little.", Winston Churchill, in 1940, speaking to the House of Commons. The Blitz continued and the War was most definitely not won but the British population rejoiced as the threat of invasion was over. F.Moynan Shell 1 14/03/02 ...read more.