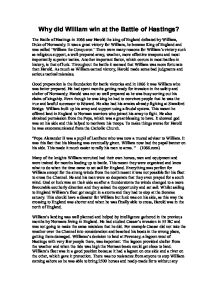 Why did William win at the Battle of Hastings?

Why did William win at the Battle of Hastings? The Battle of Hastings in 1066 saw Harold the king of England defeated by William, Duke of Normandy. It was a great victory for William, he became King of England and was called 'William the Conqueror.' There were many reasons for William's victory such as religious support, a well-prepared army, weather, more effective weapons and most importantly superior tactics. Another important factor, which occurs in most battles in history, is that of luck. Throughout the battle it seemed that William was more fortunate than Harold. As much as William earned victory, Harold made some bad judgments and serious tactical mistakes. Good preparation is the foundation for battle victories and in 1066 it was William who was better prepared. He had spent months getting ready for invasion in the safety and shelter of Normandy. Harold was not so well prepared as he was busy sorting out his claim of kingship. Even though he was king he had to convince people that he was the true and lawful successor to Edward. He also had his armies already fighting at Stamford Bridge. William built up his army and support using a feudal system. This meant he offered land in England to Norman warriors who joined his army to fight. He also obtained permission from the Pope, which was a great blessing to have. It showed god was on his side and this helped to motivate his troops. To make things worse for Harold he was excommunicated from the Catholic Church. ...read more.

This meant they were crowded in one spot and were easy to attack, especially with arrows. Another disadvantage with being in one large group was they had difficulty moving through the narrow battlefield. William's army however were the complete opposite. They were made up of three main armies, one commanded by himself, the Bretons and the Flemish army. William chose to strike early and caught Harold by surprise. His army was quickly organised and headed straight for Harold's stronghold on Caldbec Hill. A major tactical advantage was Williams's decision to attack from three different sides. He ordered the Bretons to attack from the left, the Flemish form the right and his Norman army attacked through the centre. Each of these armies was divided into three rows - the archers, the infantry and the cavalry. William's plan was to use the archers first to send their arrows into the English ranks, followed by the infantry in hand-to-hand combat and to finally attack with the cavalry who had the height and power of being on horseback. The effect on the English would be a strong attack from three different directions over a short period of time. This would wipe out large parts of the English army and leave those who were left totally demoralised. This shows how much better a communicator William was when compared with Harold. He would always tell his men what he expected of them. William could lift his men's spirits by telling them how God was on their side, their opponents were not as good as them and that winning would make them great. ...read more.

The Normans would attack using different sets of infantrymen and mounted knights so one group could rest while another attacked. The English were not so lucky as they had to stand close, next to each other or the wall would not be effective. They would tire standing in one spot trying to hold the Normans back but the Normans would have fresh men ready to attack. As the battle went on William realised that time was running out for his side and that Harold would have reinforcements the next day. He then made the vital decision that would lead to a Norman victory. Instead of attacking using three different stages: archers, infantry and cavalry he ordered that everyone attack at the same time. "William now used all three arms simultaneously, whereas in the morning they had been used successively." (1066 Year of Destiny- Terence Wise) The Normans finally got to the top of the hill and could now fight the English on flat ground. It was not long before the cavalry broke the wall into smaller sections. They dealt with these sections one by one until the battle was over. William's infantry and cavalry then got through and killed Harold. His army was so shattered by the death of their leader that their morale went down and they could no longer fight. The fact that the entire battle only took ten hours showed the ruthlessness of the Normans and made any Saxon retaliation impossible. Books/Websites 1066 Year of Destiny- Terence Wise William the Conqueror- Philip Ardagh The Enigma of Hastings- Edwin Tetlow (English Historical Documents) About.com- Battle of Hastings 1066.com Britannica 2001 CD ROM ...read more.