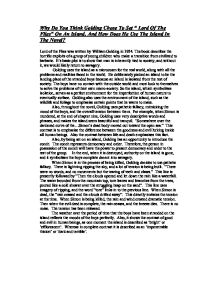 Why Do You Think Golding Chose To Set &quot; Lord Of The Flies&quot; On An Island, And How Does He Use The Island In The Novel

Why Do You Think Golding Chose To Set " Lord Of The Flies" On An Island, And How Does He Use The Island In The Novel? Lord of the Flies was written by William Golding in 1954. The book describes the horrific exploits of a group of young children who make a transition from civilized to barbaric. It's basic plot is to show that man is inherently tied to society, and without it, we would likely return to savagery. Golding uses the island as a microcosm for the real world, along with all the problems and realities faced in the world. He deliberately picked an island to be the landing place of the stranded boys because an island is isolated from the rest of society. The boys have no contact with the outside world and must look to themselves to solve the problems of their own micro-society. ...read more.

Therefore, the person in possession of the conch will have the power to present democracy and order to the rest of the group. In the end, when it is destroyed, authority on the island is gone, and it symbolises the boys complete decent into savagery. When Simon is in the process of being killed, Golding decides to use pathetic fallacy. There is lightning ripping the sky, and a lot of tension is being built. "There were no words, and no movements but the tearing of teeth and claws." This line is presently followed by "Then the clouds opened and let down the rain like a waterfall. The water bounded from the mountain top, tore leaves and branches from the trees, poured like a cold shower over the struggling heap on the sand". ...read more.

The island gives us a chance to see how society reacts in such a situation, and how eventually, mob mentality gets the best of humans. It is in their nature. Golding uses the island for symbolic purposes, giving it a beach, platform, jungle, mountain, and rocky extremity, each of which can be used to represent human potentials and aspirations. The island can also be represented as society itself, and the introduction to the theory of the beast can be depicting the evil lurking within each human being, or the destruction of human ethics. The fire could be representing civilization, and hope. In conclusion, Golding uses the island very well in this novel. He uses it to inform us about man's constant battle against the forces of evil and corruption, but also to emphasise the isolation and lack of civilization of the boys. He uses descriptive writing about the island to ease tension, but also makes to build it up. Cyrus Maravala 11F ...read more.