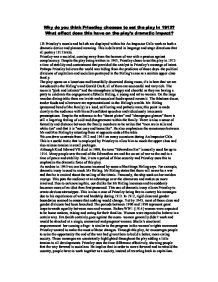 Why do you think Priestley chooses to set the play in 1912? What effect does this have on the play(TM)s dramatic impact?

Why do you think Priestley chooses to set the play in 1912? What effect does this have on the play's dramatic impact? J.B Priestley's morals and beliefs are displayed within his An Inspector Calls work as both a dramatic device and planned meaning. This is delivered in language and stage directions that all portray 1912 traits. Priestley was a socialist, coming away from the horrors of war with a passion against complacency. Despite the play being written in 1945, Priestley chose to set the play in 1912- a time of stability and contentment that provided the catalyst to Priestley's message of intent. Perhaps Priestley believes the world was hiding from the problems of those days- the political divisions of capitalism and socialism portrayed in the Birling's case as a smitten upper class family. The play opens on a luxurious and beautifully decorated dining room, it's in here that we are introduced to the Birling's and Gerald Croft, all of them are successful and very rich. The room is "pink and intimate" and the atmosphere is happy and cheerful as they are having a party to celebrate the engagement of Sheila Birling, a young and na�ve woman. On the large wooden dining table there are lavish and succulent foods spread across it. The fabulous decor, tender foods and silverware are representational to the Birling's wealth. Mr. Birling (presumed head of the family) is a loud, self-loving and pathetic man; this point is made clearly to the audience with his self-confident speeches and ridiculously inaccurate presumptions. ...read more.

His name, Inspector Goole, indicates this as Goole sounds like Ghoul and Inspector sounds like spectre. The Inspector is used to 'correct' the capitalists and makes a strong statement in favour of socialism in his final rhetorical speech. In this speech he states that for lower class, "Eva Smiths and John Smiths" there is a "chance of happiness" in socialism. The Inspector also makes the audience realise that they are "members of one body" and that they should try their best to help people like Eva Smith, otherwise, as the Inspector implies, "they will be taught in fire and blood and anguish". This almost acts as a threat to the audience and incites them to recognize the value of Priestley's message. That statement leads onto the question "Has the world's attitude changed at all from 1912, to this day?" There are so many questions designed to help the audience to help themselves. Mr Birling's views are portrayed as wrong and the Inspector's right. So, if the world still hasn't learned the valuable lesson then it will be forced to learn it again and again in "fire and blood and anguish" until it understands. The emergence of the Labour Party relates to the Inspector's messages as workers, such as Eva Smith, were still not taken seriously by many employers. The promise of The Welfare State was a proposition that could excite many workers under the wrath of industrialists like Mr Birling. Many industrialists got rich in the 1800s. Men like Arthur Birling may have come from humble backgrounds but this new wealth allowed them to climb up the social ladder (social positions). ...read more.

Act Two then begins, exactly the same as Act One ended. Priestley decided not to change anything in order to achieve a sense of continuity. Continuity is thus used as a dramatic device to keep the play focused and concentrated on one subject. This also raises the tension and draws in the attention of the audience. Priestley emphasises the difference between the upper and lower classes very strongly throughout the play. He uses the Birling family as a representative of the Upper Class and Eva Smith as a representative of the Lower Class. Priestley shows how in 1912, Upper Class citizens, such as the Birling's had no respect for Lower Class citizens. He uses this class divide to convey his message and to show that the rigidity of the class system is incompatible with his views on community and responsibility. The fact that a meaningful message is represented would indicate that An Inspector Calls, as well as being a murder mystery, in the way that Priestley uncovers the story of the death of Eva Smith, is also a moralistic play. Priestley shows the audience how not to live their lives, using dramatic devices to demonstrate this. He makes the audience contemplate over the fact that they are actually "members of one body" and that they are all "responsible for one another" and has made them realise that socialism is the way forward instead of capitalism. In this way, An Inspector Calls is very relevant to today's society where people still do need to work together and help others in need. J.B.Priestley effectively uses many dramatic devices in An Inspector Calls, such as symbolism and timings. He applies them in order to portray his political views, using an upper class, Edwardian family to do so. ...read more.