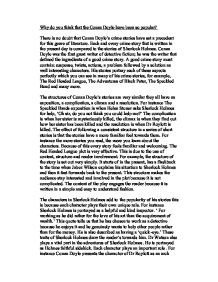 Why do you think that the Conan Doyle crime stories have been so popular?

Why do you think that the Conan Doyle have been so popular? There is no doubt that Conan Doyle's crime stories have set a precedent for this genre of literature. Each and every crime story that is written in the present day is compared to the stories of Sherlock Holmes. Conan Doyle was the first great writer of detective fiction; he was the writer that defined the ingredients of a good crime story. A good crime story must contain: suspense, twists, actions, a problem followed by a solution as well interesting characters. His stories portray each of these aspects perfectly which you can see in many of his crime stories, for example, The Red Headed League, The Adventures of Black Peter, The Speckled Band and many more. The structures of Conan Doyle's stories are very similar they all have an exposition, a complication, a climax and a resolution. ...read more.

This quote tells us that he has chosen to work as a detective because he enjoys it and he genuinely wants to help other people rather than for the money. He is also described as having a 'quick-eye.' These traits of Sherlock Holmes draw the reader's towards him. Dr Watson also plays a vital part in the adventures of Sherlock Holmes. He is portrayed as Holmes faithful sidekick. Each character plays an important role. For instance Conan Doyle presents the character of Dr Roylott as an arch villain to the reader. He is portrayed as a clever, cruel and cunning man. 'He has nerve and he has knowledge, this man strikes even deeper.' This quote gives us the impression that Dr Roylott is an educated man, who is also very cunning. Therefore it is hard to accuse him of any crimes because he is very good at covering his tracks. ...read more.

For instance when Dr Watson says 'I felt that an evil time might be coming down upon those whom he had set himself to hunt down.' We are given the impression of upcoming danger and it also leaves us in suspense. 'Kindly put your revolver in your pocket,' this quote gives us evidence that there is upcoming danger, otherwise Sherlock Holmes would not have warned Dr Watson to bring his gun along unless he anticipated danger or violence. 'A considerable crime is in contemplation' this quote gives us evidence that there is danger lurking about; I think this because the word crime is usually associated with danger and violence. These quotes successfully help to produce a dangerous atmosphere in the red headed league. In my opinion, I think that the Conan Doyle crime stories are so popular because of the perfectly mixed combination of hooking storylines, clever solutions, bizarre idea's and reader involvement. ?? ?? ?? ?? ...read more.