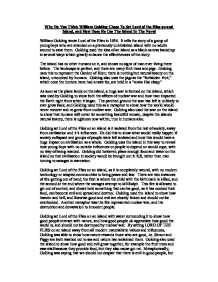 Why Do You Think William Golding Chose To Set Lord of the Flies on and Island, and How Does He Use The Island In The Novel

Why Do You Think William Golding Chose To Set Lord of the Flies on and Island, and How Does He Use The Island In The Novel

William Golding wrote Lord of the Flies in 1954.  It tells the story of a group of young boys who are stranded on a previously uninhabited island with no adults around to save them.  Golding used the idea of an island as a blank canvas backdrop in several ways which greatly enhance the effectiveness of the story.

The island has no other humans on it, and shows no signs of man ever living there before.  The landscape is perfect, and there are many fruit trees and pigs.  Golding uses this to represent the Garden of Eden; there is nothing but natural beauty on the island, untouched by humans.  Golding also uses the pigs as the “forbidden fruit,” which once the hunters have had a taste for, are held in a “snake like clasp.”

As soon as the plane lands on the island, a huge scar is formed on the island, which was used by Golding to show both the affects of nuclear war and how man impacted the Earth right from when it began.  The parched ground the scar has left is unlikely to ever grow back, and Golding used this as a metaphor to show how the world would never recover and re-grow from nuclear war.  Golding also used the scar on the island to show that humans will never let something beautiful remain, despite the islands natural beauty, there is ugliness now within, true in humans also.

Golding set Lord of the Flies on an island is it isolated from the rest of society, away from civilisation and it’s influences.  He did this to show what would really happen if society collapsed and groups of people were left isolated and how this would have a huge impact on civilisation as a whole.  Golding uses the island in this way to reveal how young boys with no outside influences or people to depend on would cope, with no way of being rescued.  Golding did however; place enough food and water on the island so that civilisation in society would be brought out in full, rather than man turning to savages in starvation.

Golding set Lord of the Flies on an island, as it is completely natural, with no modern technology or adapted communities to bring peace and law.  There are two instances of fire getting out of hand; the first is where the child with the birthmark is killed, and the second at the end where the savages attempt to kill Ralph.  This fire is allowed to get out of control, and shows how something that can be good, as it has cooked their food, can become evil and spread and destroy.  Golding used the island to show how heaven and hell, and likewise good and evil are closely linked and should not be overlooked.  Another metaphor was the fire represented nuclear war, and the destruction and devastation to innocent people.

Golding set Lord of the Flies on an island with water surrounding it to show how good people interact with nature, and how good people do appreciate how good the world is, and should not be destroyed by nuclear war.  By setting LORD OF THE FLIES on an island away from all modern materialistic values and influences, Golding was able to show how nature rewards those who are good, i.e. Simon and Piggy are both washed out to sea and nature has reclaimed them.  Golding also used the island to show how good and evil grow together, for example the fruit trees and essential because they provide food, but they also cause gut rot.  Metaphorically, Golding was saying that we should not despair that there is evil in good people, but recognise that good and evil will always be there and we should try to live harmoniously and not let evil control us.

Overall, I believe that Golding used the island setting in Lord of the Flies in several imaginative ways, both metaphorically and biblically. I believe that his main reason for setting Lord of the Flies on an island was to keep the small boys away from all influences that may have altered there behaviour, and ultimately may have saved them from “the end of innocence.”  Golding wanted to prove that even in the most innocent of children, there is good and evil living together inside of one person.  Golding also used many metaphors of nuclear war, for example the scar, and the fires, which rampaged, through the island in an attempt to kill an innocent person: Ralph.  In order to achieve Golding’s aim of an allegory, he began the world again, and watched as good and evil fought inside of each of them to ultimately determine the fate of the island, or on a bigger scale, the world.

This is essay shows a very good understanding of the allegorical resonance of Golding's choice to set 'Lord of the Flies' on an island. The candidate presents a number of theories and analytical explanations for certain themes and motifs connotatively ...

This is essay shows a very good understanding of the allegorical resonance of Golding's choice to set 'Lord of the Flies' on an island. The candidate presents a number of theories and analytical explanations for certain themes and motifs connotatively surrounding the island as well as the physical island itself. There is also a rationalisation of these analytical points as they are evidenced by characters and at various points in the novel.

The structure though need some work, as does the clarity in written expression (more on this in "Quality of Written Communication"). The structure however can be discussed here. Where it is is good is that the candidate attributed each paragraph to one or two points that are nicely linked so the essay appears to flow well, but the discourse markers, whilst an obvious attempt to explicit link their points to the question, are clunky and often disrupt the natural flow of the essay be sounding repetitive and tired. Candidates should always aim to vary their discourse markers (the first few words of a sentence at the beginning of each paragraph), to continually maintain interest in the reader, because when marking dozens of similar essays, the need to be interesting and engaging is important to examiners.

The Level of Analysis here is very professional, with the candidate showing a great depth of knowledge about the novel and the intentions with which William Golding wrote it. There is a sensitive appreciation and handling of the methods with which Golding aimed to show how well-behaved humans can turn into savages (e.g. - the understanding that Golding did not want the savagery to be a result of starvation, but of a lack of civilisation and social rules). As a result, this is a very well-argued essay, which succeeds due to it's illuminating points about the symbols Golding implements into the novel. Where I would instruct the candidate to improve is to make the point of isolation clearer - the island is surrounded by an enormous body of water - most likely the Pacific Ocean - and so by setting the events of the novel on this isolated dwelling he is suggesting that the events that unfold are a result of no connection with anything resembling authority, convention or civilisation. Whilst this point is briefly made and is made well, to gain a higher grade the candidate should look to fatten out their analysis of this point. As it stands, this essay looks to be worthy of a high B/low A grade for GCSE.

The Quality of Written Communication is fair - for the most-part it is sound and makes no cause for concern but in some areas the candidate's typing errors can compromise the flow of some of the sentences. These need to be addressed if the caniddate is to lift their essay into the highest band of marks and achieve that solid A grade for GCSE.