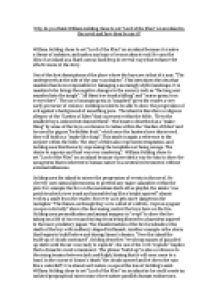 Why do you think William Golding chose to set 'Lord of the Flies&quot; on and island in the novel and how does he use it?

The transformation of the fire foreshadows the death of the boy with mulberry shaped birthmark. Another example is the storm that begins to build before and during Simon?s demise, ?Over the island the build-up of clouds continued?. Golding describes ?revolving masses of gas piled up static until the air was ready to explode?, the use of the verb ?explode? implies that a climactic event is imminent. The phrase ?build-up? is also a reference to the rising tension between Jack and Ralph, hinting that it will soon come to a head. In the course of Simon?s death ?the clouds opened and let down the rain like a waterfall?, it is almost as if nature weeps at the loss of Golding?s saint. William Golding chose to set ?Lord of the Flies? on an island so he could create an isolated geographical microcosm where nature parallels human endeavours. The island reflects the split human psyche, having a ?good? side and a ?bad? side. ...read more.

Extending the biblical allegory, Golding makes the comparison of the lagoon vs. castle rock to ?Heaven vs. hell?. William Golding chose to set ?Lord of the Flies? on an island in the novel because he wanted to create a setting that would enable him to show the different sides of human nature. In conclusion Golding chose to set ?Lord of the Flies? on and island so that he could isolate not just his protagonists but nature itself, which could be manipulated to reflect the events in the novel. He uses it as a biblical allusion to the ?Garden of Eden? and the temptation that leads to the fall of man. Nature is used to parallel the complexities in the plot. Golding also separates the island into to two halves, the ?good? side and the ?bad? side to mirror human psyche. Lastly the irony of a ?boat-shaped? island is not lost on the reader with a boat being the one thing they want and need but cannot get. By Isha Shukla ...read more.